By Janis Holt
his daughter 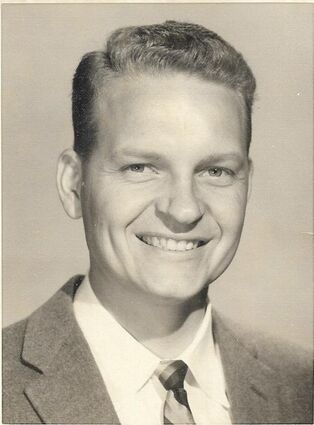 My father, Jim Downing, has passed away. He taught science and social studies at Lincoln Junior High for many years. He was very active in the Santa Monica community throughout the years he lived there.

James Richard Downing was born on January 17, 1929 in Bakersfield California. He passed away on June 28, 2022 in Santa Barbara, California. He was a devoted husband, father, educator, camper, world traveler, naturalist, volunteer, and real estate developer.

While studying for his BA at UCSB, he met Marguerite Noel, the love of his life for over seventy years. They married on September 9, 1951. After serving as an officer in the Army during the Korean War, he obtained an MA in Education from UCLA. He taught science and social studies during his teaching career of over 30 years. He taught briefly in Torrance, California before teaching at Lincoln Junior High School in Santa Monica until he retired in 1984. While a teacher at Lincoln, Jim was actively involved with his students. He sponsored clubs in astronomy, creepy creatures, strategic games and a field trip class he titled You See LA.

Jim and Marguerite had three children (Janis Holt, Kenneth Downing, and Pamela Noel Hughes). They spent many summers camping all over the United States, Canada and Hawaii. They also made numerous trips to Europe, Asia, and South America.

Throughout his whole life he was involved in numerous community service organizations including the YMCA, Western Youth Baseball , Santa Barbara Botanical Gardens, Santa Barbara Museum of Natural History and the Goleta Library. Most notably after he retired from teaching, he ran the Sunset Home, a nonprofit senior retirement home for women in Venice CA under the umbrella of Trinity Baptist Church in Santa Monica for many years.

Jim had seven grandchildren, and six great grandchildren. A memorial will be held on July 19th at 2:00 pm at Veronica Springs Church in Santa Barbara. In lieu of flowers, donations can be made to the Santa Barbara Botanic Gardens. Jim said, "This community has given me something special and I want to try in my little way to return something to the community." - Janice Holt