Chinese military officials have gone so far as to threaten to shoot down the Speaker's official airplane if she visits. 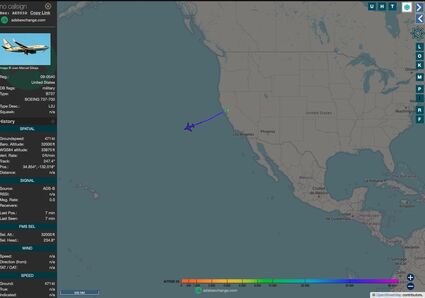 Nancy Pelosi's plane (SPAR19) departed from Honolulu at 19:00 HST and is currently traveling west towards Taiwan. At the moment it is the #1 tracked airplane on Flightradar24, with over 22k followers.

Speaker of the US House of Representatives Nancy Pelosi will arrive in Taipei, Taiwan for a Tuesday night visit, on August 2nd. This according to Ting Ting, a reporter with ties to the Taiwan military. Pelosi and several other Congress members are visiting Singapore -- their first official stop in a high-profile Asia tour that has attracted international attention over speculation she may visit Taiwan.

"From my sources, @SpeakerPelosi is arriving in Taipei tomorrow night." reports Tingting Liu 劉亭廷 @tingtingliuTVBS. She is a Foreign affairs and military reporter @tvbs_news, Taiwan.

Chinese military officials have gone so far as to threaten to shoot down the Speaker's official airplane. It's fairly clear from the history, however, that these are empty threats and rhetoric.

China has lived with the Nationalist ruled island since 1949. Periodically, the Chinese Communist Party or CCP, which rules mainland China, threatens to invade Taiwan. Once in a while they even shell offshore islands controlled by Taipei, such as Quemoy or Matsu. But they know better than to actually attack across the Taiwanese Strait, which would undoubtedly cause the deaths of hundreds of thousands of people. 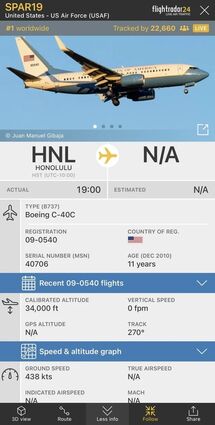 Nancy Pelosi's plane (SPAR19) departed from Honolulu at 19:00 HST and is currently traveling west towards Taiwan. At the moment it is the #1 tracked airplane on Flightradar24, with over 22k followers.

China regard Taiwan as an errant province that will one day be reincorporated into China, a la Hong Kong or Macau. The Taiwanese government also claims to be the legitimate rulers of China. While few countries recognize the Taiwan government officially, off the record contacts with most of the world's important economies have allowed Taiwan to dominate sectors of the manufacturing economy. 82% of the world's advanced chip manufacturing takes place in Taiwan, which has a population of 29 million people. China's population is fifty times as large as Taiwan's.

Pelosi is beholden to the wealthy businesses of Silicon Valley for her political success. She can make a couple phone calls and raise however many millions the Dems need for the next election, and this has been true for decades. This is considered the likely reason she is going forward with the trip, despite the Biden White House expressing reservations and perhaps even asking her not to go.