The action angered some members of the Russian minority in Latvia, who have demanded that their culture be respected.

The Latvian government Thursday took down an Obelisk commemorating Soviet victory over Nazi Germany in 1945. The move, which was captured on video, was a protest of Russia's military adventure in Ukraine, which began six months ago. It follows a similar monument destruction in Estonia.

Latvia has a total of 2,000,000 residents, of whom some 60% are ethnic Latvians. Most of the rest are Russians. The three Baltic states (Lithuanian Latvia and Estonia) have been very tense since the invasion began on February 24th. All three countries have asked NATO to base more troops in the Baltic states, and have put their own small militaries on high alert. 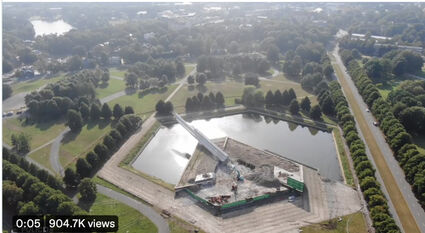 "Today, August 25, the situation during the dismantling of the obelisk in Victory Park can be assessed as calm and without significant incidents. Some violations were recorded, which were quickly corrected. Four persons were arrested. Read more: https://vp.gov.lv/lv/jaunums/situacija-pie-uzvaras-parka-25-augusta-diena-aizvaditi-mierigi-fikseti-atseviski-parkapumi"

Knocking down the monument has angered some members of the Russian minority in Latvia, who have demanded that their culture, language and history be respected and venerated. The 80 meter tall monument had been a rallying point for Russians who support the invasion of Ukraine, and who reside in Latvia.

Russia, Ukraine, Latvia, Estonia and Lithuania were 5 members of the 17 member Republics in the USSR, or Union of Soviet Socialist Republics. The USSR abruptly ended in 1989, leaving 17 independent countries.