From New Mexico to California and Tennessee, Directv receivers are unable to acquire the Satellite Signal. Is the hot weather a factor? 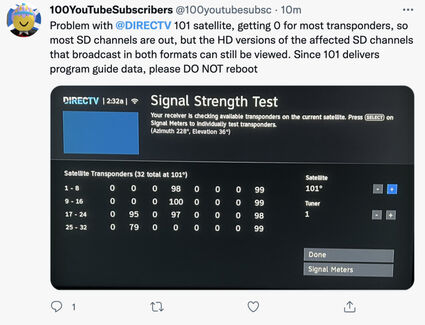 9.4.22: DIRECTV, the nations largest provider of satellite television, appears to be suffering from a widespread outage on Sunday evening, at 10:30 pm PST. From New Mexico to California and from Kentucky to Missouri, DIRECTV receivers seem unable to acquire the Satellite Signal.

"It has to be pretty widespread. I’m in Kentucky, and it’s been down since around 1am EDT. Got the 771 code. Reset twice, didn’t fix it. On hold for 30 minutes and finally hung up." tweeted JSteffen.

" I've been without a signal for the last 45 minutes and I guess your tech line isn't working, either. I've listened to the same ads for the last 25+ minutes." tweeted CeCe9.

"I know I dont even have local channels abq NM and no streaming either on phone guess watching Roku tv" tweeted Flowers of NM in Albuquerque New Mexico.

"Same here. It's been an hour. Reset and all that does nothing actually it seems to have made it worse somehow." replied Courtney, who lives in Tennessee.

Vito Corleone reports that he lost service around 7 pm PST. "Yo Directv. What's up with the college football game?" he tweeted.

"Irvine, CA here and it’s been out for awhile here too. They need to stop advising people to try and reset. It only makes it worse. I was only getting the 771 error message on a few channels but now the whole thing is out. #DirecTV". Tweeted S. Chadwick in Irvine, CA.

"Problem with @DIRECTV 101 satellite, getting 0 for most transponders, so most SD channels are out, but the HD versions of the affected SD channels that broadcast in both formats can still be viewed. Since 101 delivers program guide data, please DO NOT reboot." Tweeted 100Followers

"Thank you so much for taking the time to keep us posted about this. We'd like you to know that our team is aware now of what's happening, and we're working hard on sorting out this situation as soon as possible, so you can enjoy your service as you used to do no matter where." -SergioC Social Media Specialist replied to us on Facebook. "We're still working on check the source of the outage to fix it," Sergio added.

The weather is extremely hot in the American Southwest this weekend. But it is unclear whether or not the weather is related to the outage.

DirecTV claimed to have resolved the problem at 8 am PST on 9/5/22. 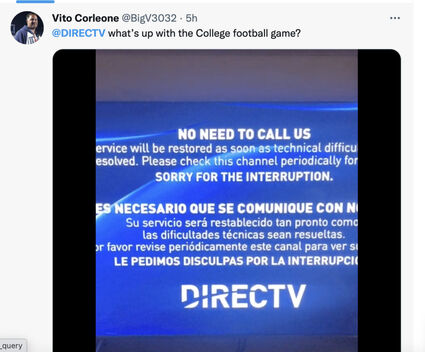 Vito Corleone reports that he lost service around 7 pm PST.

On July 24, 2015, after receiving approval from the Federal Communications Commission and the Department of Justice, AT&T acquired DirecTV in a transaction valued at $67.1 billion.

As of the end of Q1 2021, AT&T had 15.9 million pay-TV customers, including DirecTV, U-Verse, and DirecTV Stream subscribers.

On February 25, 2021, AT&T announced that it would spin-off DirecTV, U-Verse TV, and DirecTV Stream into a separate entity, selling a 30% stake to TPG Inc., while retaining a 70% stake in the new standalone company. The deal closed on August 2, 2021.