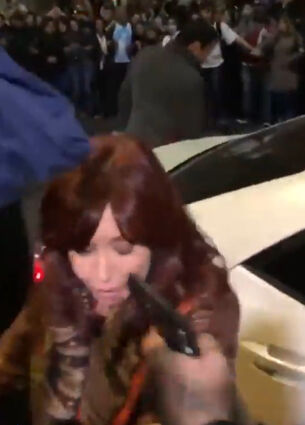 Argentina seeks to create a law against "hate speech"

Former President Macri and other opponents assure that the leftist government is taking advantage of the moment to create the "Gag Law", which has already been implemented in Venezuela and Russia....Read more >>

Bolivia, annoyed soldiers: the case of officers detained for more than a year without being charged

General Gonzalo Terceros and Admiral Palmiro Jarjury reminded the government-controlled justice operators that they have been imprisoned for more than a year but that prosecutors have not yet charged them....Read more >>

Chilean senator responded to Gustavo Petro: "let him get his bearings, not disrespect us"

Last Sunday, September 4, the Chilean population approached the voting booths to demonstrate their opinion regarding the new Constitution proposed by the government of President Gabriel Boric. With more than 60%, the community rejected the project of the current Head of State. Gustavo Petro, Colombian president, joined the wave of opinions that arose regarding the results, and caused discomfort in some sectors of Chile. "let him get his bearings, not disrespect us," commented Chilean Senator Felipe Kast....Read more >>

Some good news for a in Latin America: Some 62% of Chileans who voted in a national referendum on Sunday rejected a new constitution that would have empowered the left to restrict property rights and individual liberty....Read more >>

The overwhelming victory of the "rejection" in Chile's constitutional plebiscite was without exception in the communes with an indigenous majority, where the result was even more pronounced than in the general figure....Read more >>

In a referendum held on September 4, 62% of voters rejected the constitution drawn up by the convention; none of Chile's 16 regions approved it... The convention was also marred by scandal. On the day it was called, members of the hard left shouted over an orchestra playing the national anthem. A few months later, another member of the far left walked out of the convention after it was discovered that he had lied about his cancer, which he had played during his election campaign. Some members showed up in disguise; one voted from the shower and had to be asked to turn off his camera....Read more >>

Gustavo Petro gave his opinion on the democratic decision of Chile: "Pinochet revived"

"Pinochet revived," Colombian President Gustavo Petro wrote on his Twitter account minutes after the resounding rejection of the Chilean people of the constitutional proposal of the constitutional convention in the country was confirmed. The provocative message, involving itself in Chilean internal politics, challenges the democratic and overwhelming decision of a huge majority of the Chilean people: it is that 62% of the citizens of that country, in a historic vote......Read more >>

Colombian President Gustavo Petro signed on Wednesday the extradition order for Álvaro Fredy Córdoba, brother of his ally and congresswoman Piedad Córdoba, who is wanted by a US court to answer for drug-related crimes....Read more >>

Former President of Poland Lech Walesa, who attended a series of events on Monday at the Prison House and Brigade 2506 in Miami, called on Cuban exile leaders to make a "greater effort" to make "Cuba free." ....Read more >>

The violence of the Cuban dictatorship against the population intensified: an NGO registered 327 repressive actions in August

The Cuban Observatory of Human Rights (OCDH) denounced this Tuesday that, "one year after the resolution of the European Parliament on the government repression against the protests in Cuba", the Cuban dictatorship has intensified violence against citizens, given the deterioration of the socioeconomic situation of the country....Read more >>

Cuba: Something has changed, people have lost their fear

Father José Conrado, visiting Miami, affirms that the Cuban regime is on the defensive and lamented that while the repression intensifies, the country is bleeding to death...Read more >>

Three harsh definitions of Cuba by Leonardo Padura, its most important novelist

Leonardo Padura, that Cuban writer of novels, short stories and essays, is also a diver of stories based on real events that serve as a source for the creation of plots, especially police ones, whose focus is the social and political background in which the stories take place. narrations......Read more >>

The president of Bolivia and his siren songs

Many analysts see with good eyes that in Bolivia fuels do not rise in price. However, they forget a basic detail of the economy: there is no such thing as free. Therefore, if in Bolivia the cost of a liter of gasoline is 0.54 dollars, but the international price is around 2 dollars, that difference is covered by the State....Read more >>

After the plebiscite: Quo vadis Chile?

The sovereign people have just pronounced themselves and their vote was to reject the draft of a new constitution. And not any difference. For Chile it was overwhelming. Above what was expected. Now he must be heard. Even if it sounds redundant, first things first, that is, for no reason what has already been rejected should be repeated. That is the first decision, and the only one that corresponds in a democracy....Read more >>

Ortega and Murillo, without masks

For those who are aware of what the vindicating proposals inspired first by Castroism and later by the even more deadly duo of Castro-Chavismo mean, what is happening in Nicaragua is not a surprise, but rather the painful continuity of a regime that, like all their peers, adds to their inability to create conditions to generate wealth, a particularly cruel and ruthless repressive activity....Read more >>

The Inter-American Institute for Democracy in Miami, in conjunction with Diario Las Américas, hosts this Wednesday at 6PM (EST) the presentation of the book "Manual to Sink a Country", by Israel Mérida Martínez..."Manual to Sink a Country ", narrates in six chapters the most important events of the period of the Añez government after the resignation of Evo Morales in 2019, after 21 days of civil resistance. Backed by journalistic sources compiled and organized in a methodological and chronological manner, it reflects objectivity and veracity of the story....Read more >>

Chile: the return of rationality?

For many media and social media influencers, the results of the referendum in Chile are the beginning of the defeat of the so-called socialism of the 21st century and its launching pad, the Sao Paulo Forum. These opinions lack support and tend to confuse the situation with the political structures of Latin America....Read more >>

The National Palace will be filled this September 15 with representatives of the international left. The former presidents of Bolivia, Evo Morales, and Uruguay, José Mujica, have confirmed their attendance at the celebration of the Mexican Cry of Independence, which began the war for emancipation from Spain. Che Guevara's daughter, Aleida, and relatives of Wikileaks founder Julian Assange and Martin Luther King will also take part in the festivities....Read more >>

Amid the massive closure of local media outlets in Nicaragua and the exile of entire newsrooms, the Sandinista government of President Daniel Ortega has chosen to strengthen its ties with Russian media. This week Managua signed a memorandum of cooperation with the news agency and radio station Sputnik....Read more >>

A journalist was murdered in Paraguay: he had received a death threat written in Portuguese

A journalist was murdered this Tuesday in front of the station where he worked in the Paraguayan city of Pedro Juan Caballero, on the border with Brazil, whose mayor died last May after being shot in an attack....Read more >>

Through selective threats, military activities and disinformation campaigns, Russia reinforces the dictatorships of Cuba, Nicaragua and Venezuela, as a geopolitical support point to achieve its expansion in the region, indicated a report by the Israel News platform, an Israeli media that transmits the news in Spanish....Read more >>

Carvajal shared with the Spanish judge information and documentation he possesses about the illegal financing of the communist party Podemos. According to Carvajal, since Podemos' founding significant amounts of money were delivered to many of its leaders, with the concrete mission of creating a Bolivarian regime in Spain, to the image of that of Venezuela's....Read more >>

Maduro includes Saab's wife in negotiations with the opposition

Camilla Fabri, wife of the Colombian businessman and alleged figurehead of the dictator Nicolás Maduro, Alex Saab, detained in the United States, was included as part of the official delegation of the Nicolás Maduro regime at the negotiating table in Mexico, with the Venezuelan opposition...Read more >>

"What a pain for the peoples of Latin America and the Caribbean, for the memory of the martyrs, the disappeared, the tortured," Maduro said while questioning the lack of leadership on the left in Chile....Read more >>