"An official gathered those being drafted, "Official started explaining everything clumsily, some guy walked out of line and said 'nobody's going anywhere.' And then I heard 3 shots" 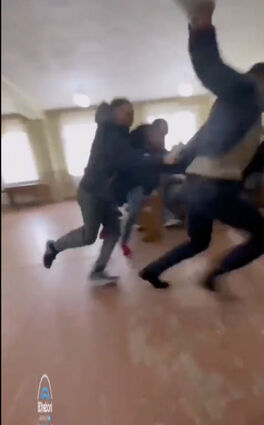 Other inductees running from gun fire in a draft center.

Alexandr Yeliseev, the commander, of the Ust-Ilimsk military registration and enlistment office was shot four times almost point blank. He died in the hospital a few hours later. According to eyewitnesses, the shooter said: "No one will fight, now we will all go home."

"The shooter is Ruslan Zinin, born in 1997, partially mobilized" tweeted reporter Anton Gerashchenko. "He decided jail is better than death in Ukraine.

The report was tweeted by Andrew Roth, Moscow correspondent for the Guardian.

"Audio from a @BaikalPeople witness at the shooting of the military commandant: official gathered those being drafted, "started explaining everything clumsily, some guy walked out of line and said 'nobody's going anywhere.' And then I heard 3 shots.""

The purported shooter, a 25-year-old local man named Ruslan Zinin, was reportedly extremely agitated after his best friend got drafted. He had told his mother this morning he was going to draft center to volunteer, reports АSTRA, a local news agency. https://twitter.com/Andrew__Roth/status/1574290436482830337?s=20&t=e4ETrRUD5UcozPQ53n-mkA

On September 20th, Russian President Vladimir Putin announced the mobilization of 300,000 former Russian armed forces personnel. The move has been highly unpopular, and has led to protests in many Russian cities and towns. Putin's order is seen by some Western analysts, as a desperate attempt to turn the tide in Russia's favor in its 7 month old invasion of Ukraine. A war that Russia could soon lose, against a much smaller opponent armed with Western artillery and military technology. 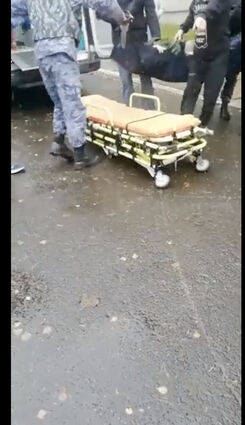 Wounded Russian commander of a draft center, is taken out in a stretcher after shooting.

"A Russian man lit himself on fire at a bus station in Ryazan while yelling he didn’t want to take part in the Ukraine war. Same morning as a military commandant overseeing the draft in a Siberian town was shot. Tensions high in Russia over mobilization." tweeted the Guardian newspaper's war correspondent Andrew Roth.