Historic storm expected to cause over $100 billion in property damage to Florida's West coast. 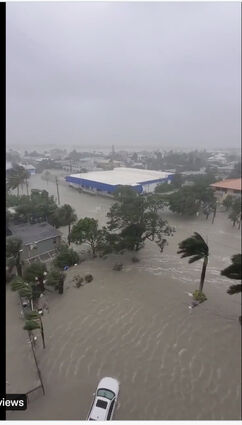 1 pm EST: The National Hurricane Center said that the eyewall of Hurricane Ian was moving onshore at Sanibel and Captiva Islands.

In an update, Acting NHC Director Jamie Rhome said that extreme wind warnings would be in place for the Sanibel, Cape Corral and Boca Grande areas.

An extreme wind warning is in effect for Englewood, Rotonda, and Grove City until until 2 p.m. EDT. "Treat these imminent extreme winds as if a tornado was approaching and move immediately to an interior room or shelter NOW!" the National Weather Service in Tampa Bay wrote in a tweet.

Rhome said residents in this areas should not venture outside at all and brace for impact. "You really have to get into the interior of your house and ride this part out," he said.

9/28 11am EDT: Eyewall of #Ian moving onshore. Catastrophic storm surge along with destructive waves are expected along the southwest Florida coast from Englewood to Bonita Beach, including Charlotte Harbor. Residents should urgently follow evacuation orders in effect. National Storm Center. 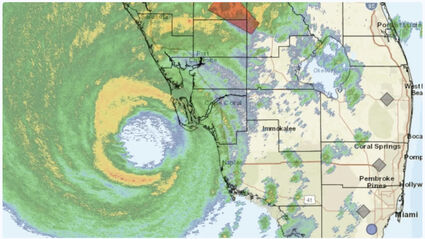 There were the usual arguments on Twitter over whether or not US Pres. Joseph Biden, a Dem, should help Florida, a red state, get through the storm. And Ben Shapiro derided Don Lemon of CNN for insisting the storm was connected to climate change, when meteorologists explained that no one event could be linked to climate change.

No one could question the historic nature of the storm, expected to cause over $100 billion in property damage to Florida's West coast.

Severe storms pile water on their right sides, an effect scientists call a storm surge. At 12 to 18 feet, this one will cause inland flooding. Tampa Bay, however, appears to be out of the path of the highest storm surge, and will experience instead perhaps 6 feet of surge.