Sue Himmelrich Is a Bully Like Donald Trump, Should Not Be Mayor 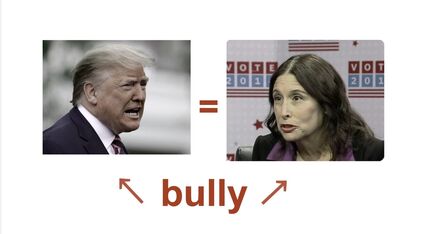 It is this Council's responsibility to the voters to demote Sue Himmelrich from the position of Mayor – in order to protect democracy.

Himmelrich acts like a dictator who controls, intimidates and manipulates Council proceedings even though she is supposed to act as a neutral meeting facilitator only.

Himmelrich is reported to have effectively bought her Council seat in 2014.

Himmelrich is an elitist, disconnected, virtue-signaling fauxgressive in a City which overwhelmingly voted for Bernie Sanders in the most recent Presidential primary.

Himmelrich has a track record of orchestrating petty but elaborate personal vendettas in response to imagined slights against her or her husband.

Himmelrich is reported to be trading votes, which I understand is a violation of the law.

Himmelrich has been actively preventing low income tenants in Santa Monica, mostly disabled people and minorities, from organizing. This is truly shocking considering Himmelrich claims to be or to have been employed with the Western Center on Law and Poverty.

Two weeks ago Himmelrich angrily called a tenant organizing nonprofit to admonish them for sending a letter to the Council in support for the creation of the federally mandated Resident Advisory Board for the poorest tenants in Santa Monica. Think about it: this is our Mayor? Trying to intimidate a nonprofit organization which supports the organizing of the poorest tenants in the City?

Himmelrich is an embarrassment to the City, this Council, and the position of the Mayor.

Himmelrich is a bully, much like former President Donald J. Trump.

Please demote Himmelrich from the position of Mayor.

The above is a public comment delivered before the Santa Monica City Council on September 27, 2022.