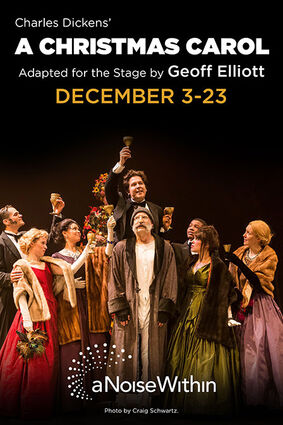 Courtesy of "A Noise Within"

Universally acclaimed for its innovative staging, whimsical costumes, original music and boundless good cheer, the delightfully festive, musically merry stage adaptation by Geoff Elliott of Charles Dickens' A Christmas Carol returns to A Noise Within this holiday season from December 3 through December 23.

Now in its 10th year, A Noise Within's production has become an annual tradition for many Southland families.

"It's very visual and highly theatrical," says director Julia Rodriguez-Elliott, who co-directs alongside Elliott. "Each of the worlds Scrooge visits has a very specific feel to it. By the end, both adults and younger audiences feel as if they've gone on an incredible journey."

Unlike most stagings of Dickens' famous story, Elliot's adaptation remains scrupulously faithful to the source material.

"It's unique because it's 100 percent Dickens," he explains. "A Christmas Carol is probably the greatest story of transformation and forgiveness that has ever been written in the English language, and all of the words in our production are right out of the novel - we haven't added a single one."

"The joy the audience feels when they come to our production is infectious," adds front-of-house manager Melody Moore. "At the beginning of each holiday season, all of us who work in the house start jumping around the minute the music starts. It's just a delight every single night. The thing I hear all the time from audience members is, 'Now, finally, Christmas can start.' "

In addition to adapting and co-directing, Elliott takes on the role of mean, miserly Ebenezer Scrooge, whose ultimate redemption is at the heart of the story. The rest of the ensemble includes Jeremy Rabb as Marly, Bert Emmett as Bob Cratchit, Emily Kosloski as Mrs. Cratchit, Rafael Goldstein as Scrooge's nephew, Fred, Sydney A. Mason as Fred's wife, Stanley Andrew Jackson III as the Ghost of Christmas Present, Deborah Strang as the Ghost of Christmas Past and Frederick Stuart as the narrator. Also in the cast are Clifton Adams, Stella Bullock, José Donado, Cynthia San Luis, Amalia Anne Morris, Kwayi Ndjamen, Roshni Shukla and Andrea Somera.

The original music is composed by Robert Oriol and Rod Bagheri is the music director. The production features a scenic design conceived by Jeanine A. Ringer, an original costume design by Angela Balogh Calin, lighting design by Ken Booth and sound design by Oriol. Wigs and make up are by Tony Valdés, and the dialect coach is Andrea Odinov. The production stage manager is Taylor Anne Cullen.

"Only a die-hard humbug could remain unmoved by so charming a yuletide treat," wrote the Los Angeles Times in its "Critic's Choice" review, while the LA Weekly said "GO! Magic as soon as the lights come up."

A Noise Within has been called "an oasis for those who love classic stories" by the Los Angeles Times and is a leading regional producer based in Pasadena, California. ANW's award-winning resident company is committed to representing the entire community at its state-of-the-art, 324-seat performance space. In addition to producing world-class performances of classic theater, the organization runs robust education programs with the goal of inspiring diverse audiences of all ages. ANW believes in working hard on its anti-racist practice across the whole organization. By interpreting its mission to fully engage audiences through community and artist-centered work in multiple creative disciplines, ANW is striving to be a theater that better serves the entire community.

Tickets start at $25. Student tickets start at $18. Tickets to the performance on Friday, Dec. 9 will be Pay What You Choose, with tickets starting at $5 (available online beginning at 12 p.m. the Monday prior to that performance). Discounts are available for groups of 10 or more. Appropriate for ages 5 and up (babies and toddlers not permitted).

The 11 a.m. matinee on Saturday, Dec. 10 will be a sensory-friendly "Relaxed Performance" offering audiences a shorter run time; freedom to talk and move around the theater during the performance; reduced lighting and sound effects; designated activity/relaxation spaces for those who need a break; and trained staff available to assist patrons throughout the event. More information is available at http://www.anoisewithin.org/relaxedperformances.