"The Wizard, as Crafty as he was Wealthy, Realized the Damage Could be Reversed if Enough Elephants Replaced the Donkeys..."

The Wizard and the Pamphleteer: A Children's Tale. Alternate title: Once Upon an Election Eve 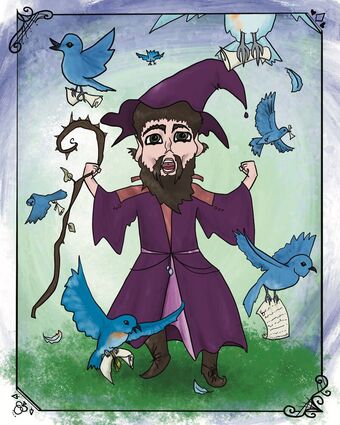 Children, do you know what day it is? That's right, it's the day after the election. Gather round children, while I tell you a story about the most famous election of all, the one that saved the kingdom. The story involves magic, of course, and a famous wizard, the richest and wisest man in the whole kingdom. A genius among geniuses. A man who played chess while everyone else played checkers.

In those days, the kingdom was ruled by Old King Joe, a seemingly kindly but rather senile old man. The kingdom held periodic elections for the National Legislature, whose advice on laws bound Old King Joe. Two different groups vied for power in this legislature, the Ruby Red Elephants and the Sapphire Blue Donkeys.

Once Upon an Election Eve, the Donkeys were not doing especially well in pre-election polling even though they controlled all of the town criers and the printing presses. Only a small group of troubadours and the occasional local pamphleteer were not under the thumb of the Donkeys. They called themselves Foxes.

In order to maintain a power the Donkeys were afraid might be snatched away in the next election, they came up with an idea. They would warn the voters that the Ruby Red Elephants were actually Fire Red Devils, led by a very Bad Orange Man. The Ruby Red Elephants - really Devils - obviously thrived on violence, said the Donkeys. Not only that, but the Elephants - really Devils - would force women to have children, rob the charity box, and lock up everyone of a different skin color.

The Donkeys were having a hard time getting anyone to believe their far-fetched story, but then only 12 days before the election, an evil troll named Schizoid Nincompoop somehow gained entry to the castle. Once inside, he swung a mace and hit a knight who was married to a high-ranking Donkey prophetess.

All of the town criers (except the Foxes) were quick to make use of the tragic incident. "You see? We told you. Nincompoop was wearing red underwear! That proves he's Red and Orange through and through! These Elephants - really Devils - are extreme and violent. If you vote for them, democracy will disappear forever from the kingdom."

The Wizard heard the town criers and their story. He had not been born in the kingdom but had moved there in his youth. A stranger in a strange land, he had become the richest man in the kingdom by casting spells that made carriages move silently without horses and created fire-breathing dragons that flew through the sky all the way to the moon.

Concerned by the irrational story and its obvious goal, the Wizard looked out of his castle toward the land he so loved, one that his magic had helped build. What he saw scared the Wizard.

There were robbers on the highways, and even the wealthy were being attacked in their castles. There were beggars throughout the streets; drunks and addicts peed on the castle walls and camped on the ramparts and in the castle keeps.

The Coin of the Realm lost value every month as the Donkeys in the legislature minted more and more coins in order to please their constituents. Children were taught useless skills. People with some skin colors were valued above others.

Mobs rioted in the streets.

More recently, a plague had fallen upon the elderly. Even though children were immune to the disease, they were not allowed to attend school. Businesses were forced to close. This caused a shortage of essential goods and services, which all became extremely expensive. People were suffering.

Old King Joe's incompetence had not been lost on the enemies of the kingdom, who invaded some of the king's allies. The kingdom itself was unable to maintain its borders, and foreigners crossed it at will, some with evil intent. No one was even sure what a woman looked like anymore.

The Wizard knew that all of this distress began when the legislature became imbalanced in favor of the Donkeys. The Wizard, who was as crafty as he was wealthy, realized that much of the damage could be reversed if the Elephants replaced enough of the Donkeys in the National Legislature to take away their unbridled power.

Crafty as he was, he decided to swing the national election toward the Elephants and away from the Donkeys by disrupting the narrative of the town criers about the wounded knight and how the attack on him was proof of the violent propensity of the Elephants. The Wizard knew this wasn't true, so he looked among the pamphlets of the Foxes for their version of events. They might not know the truth, but at least they weren't repeating the lies of the Donkey-paid town criers.

The Wizard found an obscure pamphlet hailing from an out-of-the-way hamlet that stated an interesting opinion about the true motives of Schizoid Nincompoop. According to this foxy pamphleteer, the fact that Nincompoop had been wearing red underwear did not prove he was an agent of the Ruby Red Elephants. For he'd also been wearing blue socks. But the town criers had not reported that, which might have shown he was working for the Sapphire Blue Donkeys. The unknown pamphleteer posited that Nincompoop's motives might have been a mystery even to himself, for his brain did not appear to be in working order, even for a Donkey. 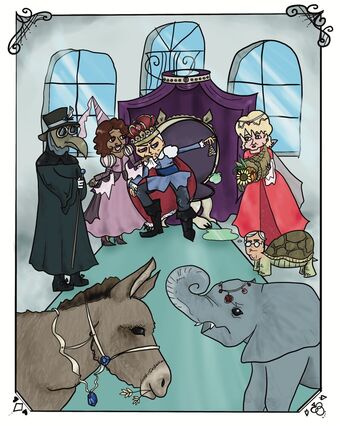 Old King Joe and his Court were powerless to solve the kingdom's real problems: Crime, inflation, loss of confidence and resolve.

Liking this theory and finding it sufficient to cause disruption, the Wizard used a magic spell to cause blue birds to distribute the pamphlet to every voter in the Kingdom. Then, after everyone had a chance to read the pamphlet, with a wave of his hand, the Wizard caused the blue birds to fly off with the pamphlets. Which only made them more interesting to the citizens.

When the town criers read the pamphlet, they howled in fury. How dare anyone suggest Nincompoop might be in league the Donkeys? They threatened to tar and feather the old Pamphleteer, who they said was not in fact a very honest or accomplished pamphleteer anyway.

The Sapphire Blue Donkey town criers were so busy heaping hatred and opprobrium, cancellation and allegations on the Wizard (who was famous and important) and the old Pamphleteer (who was obscure and unimportant) that they completely forgot to distract the voters, most of them anyway, from doing the right thing for the future of the Kingdom.

And they all lived happily ever after. -Stan Greene

This is a work of fiction. Any resemblance to persons living or dead, is purely coincidental.