In Major Victory for Ukraine, Russia announces withdrawal from Kherson and the Right Bank of the Dnipro River

Russia's commander in Ukraine, Sergei Surovikin, says it was simply no longer possible to keep supplying the city. 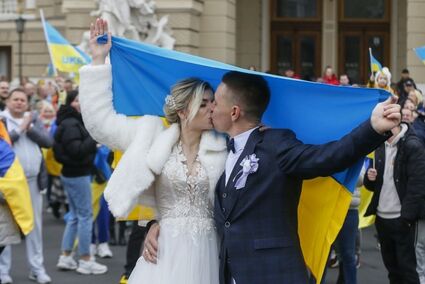 A wedding couple kiss as they celebrate together with Ukrainians in Kherson on Saturday 11.12.22, following the retreat of Russian occupiers from the city.

In. a stunning defeat, Russia's Defence minister Sergei Shoigu has announced that Russia will pull its soldiers out of Kherson. The city of 300,000 is the only provincial capital taken by Russia during the 9 month Ukraine war.

"Very impressive and hard fought victory for Ukraine," tweeted Rob Lee, an expert on the war. "The big question now is whether Russia can withdraw without taking heavy equipment and personnel losses. Ukraine has every incentive to make this withdrawal as chaotic and costly as possible." 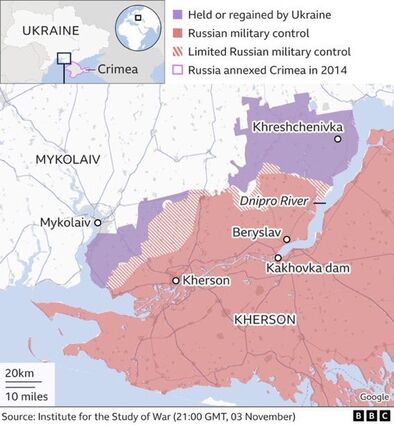 Map of the Kherson area

"Ukraine will gain 430 square kilometers when Russia withdraws from right-bank Kherson," notes Eastern European website Visegrad 24. "It will also be granted an excellent opportunity to rain down HIMARS missiles on Russian columns trying to cross the Dnipro River. Finally, it's a great chance to seize abandoned equipment."

Russia's commander in Ukraine, Sergei Surovikin, says it was simply no longer possible to keep supplying the city.

"Temporarily occupied Kherson is being defended by 30,000 to 50,000 Russian soldiers stationed on the right bank of Kherson. The Armed Forces of Ukraine will need time to liberate the city. The Russians are not at all going to retreat from Kherson, as some believe" said one military source, suggesting that the withdrawal was a feint.

Rob Lee said if it is a feint, which he doubts, it would be extremely demoralizing to Russian units remaining in Kherson, as they would fear being completely abandoned by their brothers in arms.