"You cannot overstate the significance of the Russian bases in Saratov (Engels-2) and Ryazan being hit." 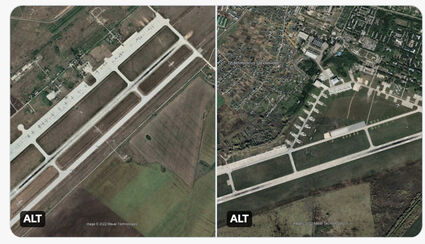 Aerial views of the Russian bases in Saratov (Engels-2) and Ryazan.

12.5.22: In what may be an important development in the war, the Ukraine Air Force today hit a Russian airfield located 400 kilometers (about 260 miles) Southeast of Moscow. This is important because it may indicate the Ukraine armed forces now have the capability to strike Russia deep within its territory, bringing the war home to Russians.

"The Russian airbase "Engels-2" has been hit. The base is located 400 km Southeast from Moscow. It hosts strategic bombers of Tu-95 and was the launch pad for numerous attacks against Ukraine. #Ukraine #Russia" tweeted Tendar.

"Early reports suggest that a Ukrainian drone strike damaged at least two Tu-95 bombers at bases in Russia. Russia responded with yet another attack on civilian infrastructure."

Security camera footage of the explosions at Engels-2 airfield.

"You cannot overstate the significance of the Russian bases in Saratov (Engels-2) and Ryazan being hit. There are 3 bases in all Russia to host strategic bombers of the type Tu-95. In comparison, it is like somebody would hit Edwards Air Force Base in California."

Neither the Russian nor the Ukraine defense ministries have confirmed the hit.

"Maybe Ukraine's new strike drone will be able to hit Russia far behind the borders. That would be a great development, and could seriously disrupt Russia's war effort," tweeted Eun McDonald.

"Reported range (1,000 km) of Ukrainian strike done said to have been successfully tested. Has 75 kg warhead. (Center at Vasylkiv airbase south of Kyiv. Could reach as far a Kazan and Samara if launched from further east).