Santa Monica Mayor Sue Himmelrich Ends her Tenure on City Council in Typical Fashion: Disdaining the Public and its Welfare 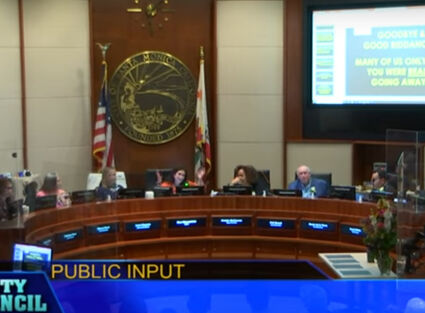 December 9, 2022 - Former Santa Monica Mayor Sue Himmelrich ended her reign in a manner emblematic of its disdain for the public, and particularly for anyone who disagrees with her. She allowed a crowd to boo a speaker critical of her tenure and only afterward reminded the crowd - while laughing - that they were not to speak or make any kind of noise during a speaker's public comment.

The Special Meeting of the City Council was held in order to swear in new councilmembers - two days before the Los Angeles County Registrar-Recorder officially finished counting the ballots. Himmelrich needed to be reminded to start the meeting with Public Comment. Perhaps she'd been distracted by the large bouquet of flowers someone had placed in view of her place at the dais. The meeting was so crowded the fire chief's officers had to clear the exits.

During the first Public Comment, it soon became clear who constituted the crowd packing the room: supporters of Mayor Sue and her pseudo Marxist/crony capitalist agenda. The speaker was retired landlord and business owner Elaine Golden-Gealer, and she presented a PowerPoint criticizing Himmelrich's term and warning that the now-former mayor intends to maintain power over tens of millions of dollars via the recently passed Measure GS, which imposes an 8-fold increase in property transfer taxes, ostensibly in order to provide housing for the homelesss.

Golden-Gealer's PowerPoint began with the information that an online petition of no confidence in Mayor Himmelrich had gathered over 1,000 signatures. Her slides went on to ironically remind the audience that Himmelrich had run on an anti-development platform. Her husband had claimed they'd chosen Santa Monica in order to live in a "diverse" community but then the pair had settled north of Montana - hardly racially diverse. They had not sent their children to public school but to the elite and expensive private Crossroads School.

The crowd booed Golden-Gealer's presentation, causing her to have to stop several times, tell them, "You can keep booing," and remind them that she had the right to voice her opinion.

Only after Golden-Gealer had finished her presentation, with the wish that Himmelrich were "REALLY going away," did Mayor Himmelrich, who was presiding over the meeting, admonish them to be quiet. "We generally have a rule, and I'm going to be enforcing it," she said, and then had to stop as laughter overtook her. "I couldn't, sort of, control them," she claimed. 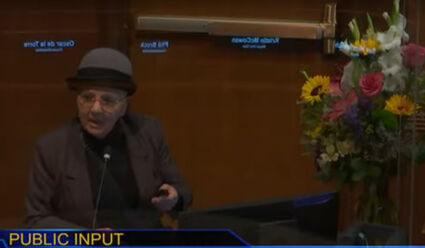 She could not possibly have told the crowd they were not allowed to make noise during a speaker's comments after they had booed Golden-Gealer the first time? Otherwise the well-heeled crowd might have rioted, I'm sure. I know they were well-heeled - or expect to be soon - since the one slide they applauded was that saying that Himmelrich and Soloff will "cling to power by using their purchased GS Ballot Measure success. " Clearly, those filling the council chambers expect some benefit from the financial windfall of the new transfer tax, and the fact they expect it be controlled by Himmelrich and Soloff.

Only after the slide show did Himmelrich say all the right things about, "Let's let people say what they want to say." Only after the booing. After she let her friends buoy what appears to be an extraordinarily shaky self-esteem. Only then did she warn them not to applaud, either (something she apparently anticipated later on in the meeting), but to show "happy hands" waving. "No negative, Harvard hissing, et cetera, et cetera," she warned, obviously too late and using a term that only people who've graduated from Harvard would know. Reminding everyone she graduated from Harvard. That shaky self-esteem...

One can only echo Golden-Gealer's parting sentiment. If only they were REALLY going away.