By The Santa Monica Coalition 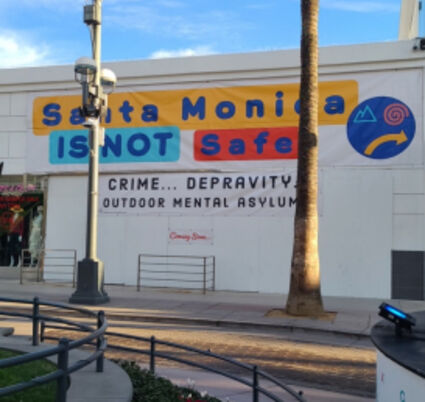 "Santa Monica is NOT Safe"

December 20, 2022 - For nearly three years now, Santa Monica property and business owner John Alle has been copying the Santa Monica Observer in numerous emails he has sent to the city's manager, parking manager, council, attorney, and the Downtown Santa Monica Inc business district board about the problems caused by drug-addicted, mentally ill, and destructive vagrants residing in the downtown area. These individuals make drugs in the parking garages, start fires in the dumpsters and even in the elevators, urinate and defecate on public property and have threatened residents with their lives. Yet nothing is done. Worse, contracts with past security companies who have failed are renewed without discussion. The following is a press release from the Santa Monica Coalition (not to be confused with slow-development group Santa Monica Coalition for a Livable City), a group including Alle. Copious photos and videos documenting the situation can be found at thesantamonicacoalition.org

Santa Monica business leaders, exhausted by City inaction on crime and homelessness, make a bold statement for the holidays.

Santa Monica business leader and civic activist John Alle, in conjunction with The Santa Monica Coalition, a group of retail and commercial tenants, residents, and property owners, have installed a message in the heart of Santa Monica's 3rd Street Promenade expressing the community's dissatisfaction with the continued neglect of the City's once attractive Downtown.

The message – on private property in full view of visitors passing the City's tall Christmas Tree and Menorah – states in large letters matching the City's official colors, that "Santa Monica IS NOT Safe." It declares, "CRIME... DEPRAVITY...OUTDOOR MENTAL ASYLUM".

Mr. Alle, a property owner who manages over 700,000 square feet of commercial and mixed use properties in Los Angeles County, said the message is a "compromise" among tenants and property owners who feel Santa Monica leadership and nonprofit Downtown Santa Monica's management "is not listening and does not care."

He says, "Some wanted an even harsher, more direct message. Business owners, employees, and City workers, and 85% of residents no longer visit Downtown. They feel unsafe. Dozens of storefronts are smashed and damaged per month. Three to four addicts die every month in our Downtown, garages, and in Palisades Park, Tongva Park, Reed Park and Douglas Park."

The humanitarian and economic costs for businesses and residents have increased to the point that countless people have given up on Santa Monica. Of all the areas Alle leases and manages property in Los Angeles County, Santa Monica is the most dangerous and worst performing. 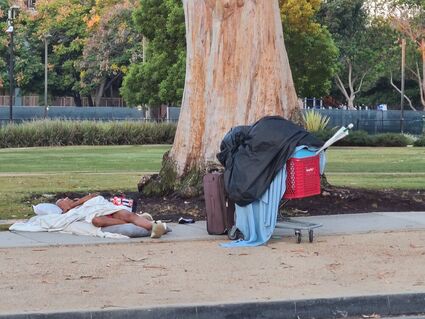 A sight everyone in Santa Monica has seen, all too often: some drugged-out individual needing care passed out on the sidewalk

Contrary to official talking points, which paint the City's homeless population as down-on-their luck locals, in reality the vast majority homeless who populate the Promenade and Downtown after sundown are transients from around the State and country. They are taking advantage of the City's weather, not to mention its tolerance and even encouragement of open sleeping, drug use, urination, defecation, sex, and violent outbursts that disrupt the community day and night.

Specifically, Alle cites verified statistics, police reports, and videos. He says, "City government tolerates and even encourages 24-hour illegal and illicit behavior. Sadly, many on our City Council even refer to 'unhoused sidewalk citizens.' It is, in a word, madness."

The message plastered across the building on the middle 1300 block of the Promenade is temporary, and Alle says more of the same is planned for other locations and areas of Santa Monica.