Police have a suspect in a white van, in a barricade situation in Torrance. They have not announced his identity so far. 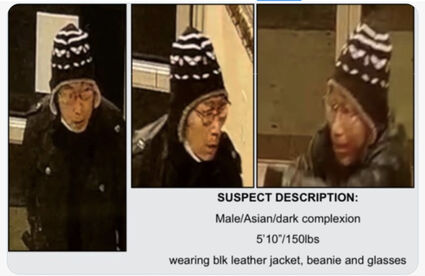 Police released this image of the suspect in the Monterery Park shooting.

Update 2 pm:The suspect in the Monterey Park massacre was found shot and dead in a van in Torrance CA, according to multiple news sources. One hour ago, a witness saw a bullet hole in the side window of the van and a collapsed body.

Update, 11 am PST: Police have a suspect wanted for questioning in the Monterey Park mass shooting last night in a white van. This SWAT barricade situation is currently unfolding in Torrance.

Update, Jan. 22 (UPI) -- Ten people died and at least 10 others were hurt in a shooting at a ballroom dance studio late Saturday in Southern California, the Los Angeles Police Department said.

A man suspect, without a description or motive, remains at large after the mass shooting that occurred at 10:22 p.m., sheriff's Capt. Andrew Meyer told reporters Sunday morning.

"When officers arrived on scene, they observed numerous individuals, patrons ... pouring out of the location, screaming. The officers made entry to the location and located additional victims," Meyer said.

He said it was too soon to determine whether the shooting, which took place in a community that is 65% Asia, was a hate crime.

"We will look at every angle," Meyer said. There was no description of the weapon used other than it was a firearm, Meyer said.

The city's event that was scheduled to be extended into Sunday is now canceled, according to Monterey Park Police Chief Scott Weise.

There has been a mass shooting in Monterey Park, a largely Chinese American community located 11 miles East of downtown Los Angeles. The shooting apparently broke out at a Lunar New Years Celebration, a Chinese traditional holiday. There were reports of up to 16 casualties. 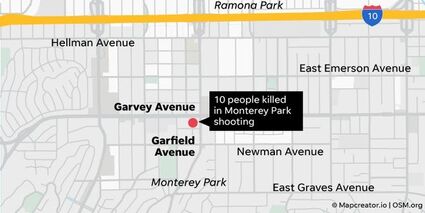 "Ok so looks like a confirmed mass shooting in the area of Garfield/Garvey in Monterey Park. No confirmation on exact number of victims but victims are being taken to multiple hospitals with multiple dead" tweeted @downtownLAScanner

"I work close by and thought it was fireworks." tweeted MrsDee. The shooting occurred just after 11:20 pm PST on January 21, 2023.

Monterey Park has consistently ranked as one of the country's best places to live due to its good schools, growing economy, and central location.Monterey Park is bordered by Alhambra, Los Angeles, Montebello, and Rosemead