"Last Call at the Oasis" 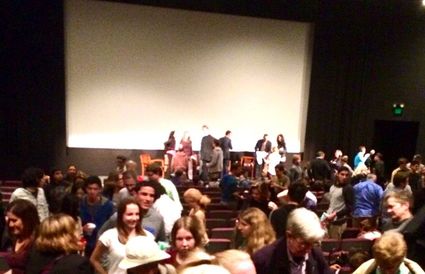 2/26: Like many in SamoHi's Marine Biology class, taught by Mr. Benjamin Kay; I attended the movie "Last Call at the Oasis" at the Aero Theater in Santa Monica. I learned that las Vegas has made some effort to conserve water, but is still in a situation of extreme water shortage

it gets water from Lake Mead and Hydro electric power from the Hoover dam, but if the water level at Hoover Dam drops to 1050 feet, Las Vegas will lose all its powers

This may happen in four years, the movie says.

Las Vegas wants to build a pipeline to extract water from Baker, but this would deprive the Baker citizens of water, so a decision still has not been made.

I also learned that the chemical Atrazine, used by a company was studied by a paid scientist to see its affect on freshwater organisms like frogs. The scientist found that the frogs were having overabundant levels of estrogen, and male frogs were becoming female at a level of 1 ppm Atrazine in the water

The scientist tried to release his findings about Atrazine's effects, but the company paid lobbyists to discredit the scientist, and threats to his safety and his family were made

This is commonly done in Singapore, but in the US many consumers are repulsed by the idea of recycled water from sewage even though it is cleaner than conventional bottled water supervised by the FDA

I liked how the movie covered a wide variety of issues. The panel discussion after the movie included Kim O'Cain, Sustainability Analyst at the City of Santa Monica's Office of Sustainability and the Environment; Mark Gold, formerly of Heal the Bay, and now Associate Director of the UCLA Institute of the Environment and Sustainability. It was moderated by Josh Rubinstein, the chief Meteorologist on CBS 2 KCal9.