A tireless advocate for his constituents died of cancer at 70 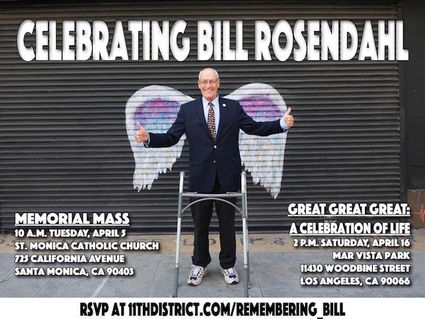 Bill Rosendahl will be remembered as an advocate for the poor

Former Westside Los Angeles City Councilman Bill Rosendahl died today, after a 4 year fight with cancer. He was remembered by his successor, City Councilmember Mike Bonin, as a tireless advocate for his constituents, and the first openly gay member of the LA City Council.

The former cable television executive and public affairs broadcaster served on the council from 2005 to 2013, when he retired to fight stage-four cancer that he was diagnosed with in the summer of 2012. Toward the end of his tenure in office, Rosendahl was an ardent supporter of medical marijuana, which he used to fight the side effects of his cancer treatments.

Mayor Eric Garcetti said Rosendahl -- often called the "conscience of the City Council" -- was an outspoken advocate of the underdog, despite the fact he represented portions of the city's west side that contain some of the city's most affluent neighborhoods.

"Our city and world lost a great friend and giant of social justice, Bill Rosendahl," Garcetti said. "He had the biggest heart I know and I will miss him deeply."

Bonin, who served as Rosendahl's chief of staff before taking over the council seat upon his retirement, said Rosendahl left an immeasurable impact on him. "My heart wants to ache, but instead swells with love when I think of Bill and the way he lived his life -- open, without boundary or inhibition, full of generosity and compassion," Bonin said. "There was no heart bigger and no smile more impressive. He has left an indelible impression on all those he knew."

Rep. Janice Hahn, D-San Pedro, a former councilwoman, said she was "heartbroken" at the news of Rosendahl's death. "Bill was one of the most selfless and kind-hearted individuals I have ever known," Hahn said. "That heart made him an incredible advocate and a beloved champion for the people he represented. He was brave in the face of adversity and had a contagious passion for life.

"I will never forget his joyfulness and his gregarious laugh that never failed to put a smile on my own face," Hahn said. "I have cherished his friendship."

In July 2012, after collapsing suddenly, Rosendahl was diagnosed with Stage 4 cancer of the ureter, a tube that connects the kidney to the bladder.

He was told he did not have long to live.

He said that for several months, he would suffer from delirium and underwent numerous chemotherapy treatments, which reduced him from a hale 225 pounds to 170.

It was only after his doctor suggested he use marijuana to help him ease the pain and get more sleep that he began to recover. The extra rest helped save his life, Rosendahl said in 2013.

He resumed his City Council duties in September 2012, throwing himself into getting a medical marijuana law passed and becoming the only council member to oppose a plan to expand an LAX runway closer to some of his constituents. In April 2013, Rosendahl announced he was in remission.

"The amount of love I've gotten has been phenomenal," he told his colleagues on his first day back from medical leave. "People have brought food to the house. People have prayed with me, people have sung with me. They put all kinds of positive energy toward me."

Rosendahl was at one time a vice president of communications company Adelphia and arrived on the council to represent the 11th Council District in 2005 after years as a cable channel host covering public affairs. Prior to that, he worked on presidential campaigns for Robert Kennedy, Fred Harris and George McGovern.

Rosendahl ran for office as openly gay, which was something that had never been done before. Two previous council members, Jackie Goldberg and Joel Wachs, came out after they were elected.

It was on one of his cable show segments that Rosendahl asked Wachs, who had been a councilman for 30 years and soon would be a candidate for mayor, an unexpected question: `Are you a gay man?" Wachs answered yes, later saying he had not planned to come out but did so because Rosendahl's show seemed like a "fair, thoughtful program." 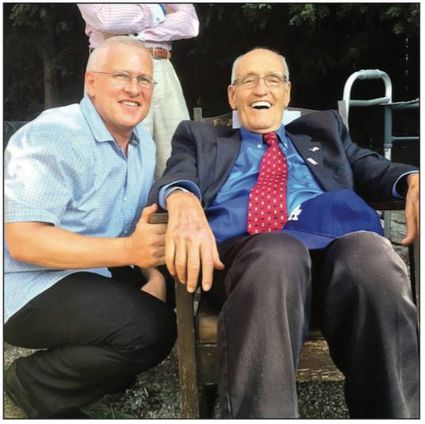 Rosendahl came out as gay in 1995 when his partner, Christopher Lee Blauman, died of complications of AIDS.

Funeral arrangements were pending, but are expected to include a Mass at St. Monica's Church in Santa Monica and a memorial service at Mar Vista Park, according to Bonin's office.

In lieu of flowers, donations can be made to organizations helping the homeless, Safe Place for Youth, New Directions for Veterans and the Jeff Griffith Youth Center at the Los Angeles Gay & Lesbian Center.