Is the Government of Saudi Arabia, Funding Hillary Clinton's Campaign?

Eric Trump asserts 20% of the $1 billion raised by Clinton, comes from the Saudis. 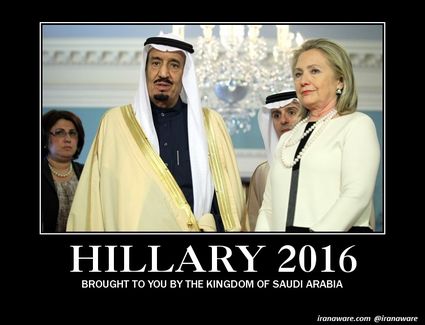 The Clinton Foundation has taken $100 million from the Saudi government.

Eric Trump asserts 20% of the $1 billion raised by Hillary Clinton's presidential campaign, comes from the Saudis. Yet on Monday, Clinton issued a pointed warning to US allies in the Middle East, saying countries like Saudi Arabia must crack down on citizens supporting extremism.

It is known that the Kingdom of Saudi Arabia donated around $25 million to the Clinton foundation. This has been known since 2008, when the new Secretary of State disclosed potential conflicts of interest. On Sunday, Trump called on Clinton to return the $25 million, to the Saudis. Donating to Mrs. Clinton's presidential campaign would be different and newsworthy.

Following the weekend massacre at a gay club in Orlando by a gunman who the FBI says may have been radicalized, the presumptive Democratic presidential nominee vowed to step up efforts to stop so-called lone wolf attacks, and said Americans should unite to defeat domestic terrorism.

But she also called on other governments to reconsider policies that allow extremism to thrive, calling out three US allies which already have sensitive ties with Washington.

"It is long past time for the Saudis, the Qataris, and the Kuwaitis and others to stop their citizens from funding extremist organizations," Clinton said in a national security speech in Cleveland, Ohio.

"And they should stop supporting radical schools and mosques around the world that have set too many young people on a path toward extremism."

According to former U.S. Secretary of State Hillary Clinton, "Saudi Arabia remains a critical financial support base for al-Qaida, the Taliban, LeT and other terrorist groups... Donors in Saudi Arabia constitute the most significant source of funding to Sunni terrorist groups worldwide." These were her words in 2014; she called Saudi Arabia and Kuwait indirectly responsible for the recent shooting of over 100 people at a gay nightclub in Orlando.

Saudi Arabia and Kuwait have piled on outrage after Hillary Clinton condemned the weekend slaughter in Orlando and directly linked the oil-rich monarchies to the funding of terrorism.

In separate letters to Fairfax Media, the embassies for both countries in Australia took exception to reporting of Mrs Clinton's call to "stop supporting radical schools and mosques around the world".

"Accusations leveled against the Kingdom of being lax or of supporting extremism fails to recognize the Kingdom's leadership role in combating terrorism," the Royal Embassy of Saudi Arabia wrote.

In her half-hour speech, the former secretary of state said "American leadership" was crucial in resolving political conflicts that fuel Islamic State extremists, as well as waging the immediate battle against terror groups and messages, including online.

"The Orlando terrorist may be dead, but the virus that poisoned his mind remains very much alive and we must attack it with clear eyes, steady hands, unwavering determination and pride in our country and our values," she said.

"The threat is metastasizing," she added.

"We face a twisted ideology and poisoned psychology that inspires the so-called lone wolves," whom she described as radicalized individuals who may or may not have direction from a formal organization.

Preceding Barack Obama's 2009 nomination of Hillary Clinton as U.S. Secretary of State, Bill Clinton agreed to accept a number of conditions and restrictions regarding his ongoing activities and fundraising efforts for the Clinton Presidential Center and the Clinton Global Initiative. Accordingly, a list of donors was released for the first time in December 2008. The list was large and included politically sensitive donors from the Kingdom of Saudi Arabia to Blackwater Worldwide. The foundation stated that the disclosures would ensure that "not even the appearance of a conflict of interest" would exist once Hillary Clinton was Secretary of State.

Very interesting article - please cover this in more depth. And please try to track down these speeches that the Clintons don't want anyone to read.