The Walking Dead Meets World of Warcraft: Come Over To The Darkside of Comic Con

I am used to being insulted by young attractive females, but my disabled son is another matter 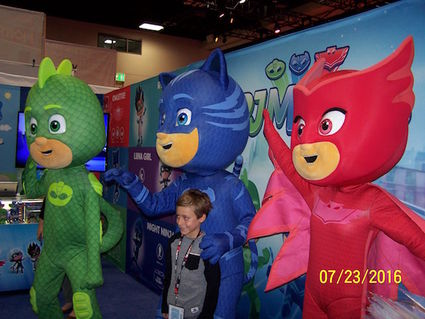 If you think Star wars is the only fantasy franchise with a dark side think again. Having just returned from an exhausting five days at the con I was exposed to several, little talked about, quirks of the con. The producers of this event love random, or so they say, but so much of the random is not as it seems.

For those of you who don't know, Comic-con is a 4 day convention of comics and pop culture. At 46 years old, it is the premier comic, science fiction and fantasy convention in the world.

Let me begin with the "Random" drawing for the Star Trek premier. Which started with a three and a half hour wait in the scorching sun with no tents to shade the attendees, and no attempt made by Comic-con to alleviate some of the discomfort of the wait. When it was finally our turn to "pull" a ticket out of the bag, I happened to pull a winning one, (or so I thought). The young girl hissed at me that I had more than one when I pulled and it was invalid. It seems that I was not "the right" sort of attendee wanted for the premier.

I am used to young attractive girls insulting me, however my son is not. He was furious and wanted to tell someone. Being more experienced at this sort of drama I knew it would be fruitless so we left with nothing more than a very bad sunburn. I found out much later that there were in fact only 500 winning tickets for the 6,000 or so hopefuls in line.

There is a section of the con that is granted priority to just about everything. This is called the ADA or Americans with Disabilities group. Now of course a person with a true disability affecting their mobility should be granted priority, however this is not the case. My son is legally physically handicapped, and in years past I felt it would be unfair to classify him as such, being that his mobility was not affected. Well!!!!!! Here at comic con you need only go to the appropriate desk, claim you are disabled and both you and a helper are given priority access to EVERYTHING. No proof of impairment required, merely a desire to be granted priority front of the line status for the duration.

When I witnessed able bodied people claiming ADA status I was incensed. It is not only inconsiderate and rude, but insulting to the ones who are truly in need.

There were many entire families making the claim, as well as the ones too lazy to walk the floor renting the motorized wheel chairs to add validity to their claim. I watched in shock as one woman got up from her scoter and RAN, to a member of her party to tell them something, Really!!! Wake up Comic-Con and address this gross abuse of status.

Let's move on to the "volunteers", or shall I call them power hungry peons. The group is comprised of people who, during the rest of the year ask you if you want fries with that, get to yell at strangers to their hearts content. They are often rude, dismissive, uninformed and if they do attempt to answer a question they will dispatch incorrect information, sending you on your way more confused than before. They put in their two hours of work in order to receive a full day pass to the event, so they make the best of it. I keep waiting for them to ask "do you want a kick in the pants with that", but then again why ask when you are granted free reign to merely act!

Being impolitically correct is where we delve now. How big and stinky do you have to be to where you finally get a good whiff or look at yourself and say "enough". I have never seen more obese people in one place in all my life, along with the hygiene challenged. Body odors, dragon breath and things no one likes to admit to emanating from the hordes of bodies pacing the convention floor.

Exclusives!!! Isn't this what the con is about, or is it Comics, so hard to remember when you're constantly being pushed, shoved and yelled at. The Hasbro line is only for the strong, all others will not survive. The winners somehow run like there are flesh eating zombies chasing them at break neck speed to get into the line, which is always capped within five minutes, (this is on the non-ticketed days).

On the ticketed days the brave rise long before dawn and stand outside hours before the doors open in order to have a chance at obtaining the coveted Hasbro ticket to buy. 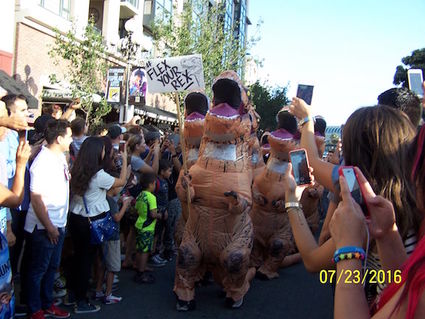 Comic Con: Dino Hunters on parade. Come Over To the Darkside, Luke!

However the ADA group gets in first, races shoving one another to get to their separate line. Amazing how quickly these disabled attendees are able to race to the other side of the convention hall.

Lines, lines, lines should be the byline of the con. For everything, stand, stand, stand there is a line yes wait, wait, wait and for your turn to even take a stab at being a winner. For the signings, exclusives, panels, meet and greet, stand and wait. Do not sit as the invisible fire marshal will shut the con down and you will never get to return.

I am not even going to discuss the Hall (appropriately named H) Line. Or line HELL where you can DIE while spending the whole con waiting to get a glance at the stars of The Walking Dead.

The walking dead is how you will feel after five days of Comic-Con Hell.