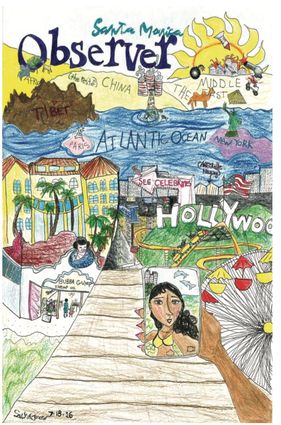 Sabine Rose wrote painted her version of the cover art, which is on newsstands throughout Santa Monica now.

Sabine Rose wrote painted our cover art this week, "View of the World from the Santa Monica Pier," which is available free on newsstands throughout Santa Monica now.

In it, a girl plays Pokemon Go on the Pier, as she looks out at Shutters on the Beach, Affordable housing in Santa Monica, and more distantly, New York, the Middle East, Tibet, China and Paris.

We asked the artist why she painted "A View of the World from the Santa Monica Pier," Sabine said:

Well I think that people’s perspective in Santa Monica is self centered, as most people’s perspective is. But it’s also visually centered. People want to look beautiful. But that’s not really what I was thinking. I wanted to show how people in Santa Monica, might think they’re really liberal and really diverse. But everyone is really very self centered. Even if you happen to be a diverse person, you can’t do anything about the Elephants in the distance.

These people, they’re defensive about the natural human state of being self centered which clashes sometimes with the global outlook of people who use the internet.

No, I don’t think so. As Joni Mitchell said, “A painter paints a painting. . . nobody every said to Van Gogh, Paint A Starry Night again. When he painted it, that was it.” Every painting is unique, as is the Santa Monica perspective. In an episode of South Park, the Priuses in Santa Monica produce a kind of smog called “Smug.” The Smug threatens to envelop the entire town. I tried to give the work that unique perspective.

Why Pokemon Go? Why have the Girl in your artwork playing Pokemon Go?

Because it's the ultimate game of self absorption. I think it's great that people are getting outside, kids are getting some exercise. I'm all for it. But they could walk off the pier, one of two of the hundreds of people playing Pokemon Go on the Santa Monica Pier could walk off the end of the Pier. I hope they don't stranger things have happened. A couple Pokemon Go players walked off a cliff in San Diego, I heard. It's not good if it's not safe. 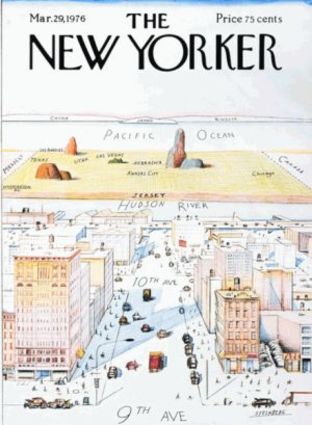 View of the World has been parodied by Ted Rall, Columbia Pictures, The New Yorker, The Economist and Mad Magazine, among others. The work has been imitated and printed without authorization in a variety of ways. It is regarded as one of the greatest magazine covers of recent generations and is studied by art students around the world.