Be a Mermaid for a day at the Monterey Bay Aquarium 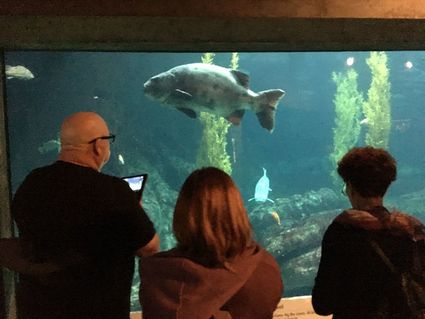 Where once they were put in cans, sea bass and giant tuna swim through a 1.2 million gallon tank.

Seconds after stepping through a pair of outsized doors into the wide-open aquarium h.q., I spotted a young educator in a navy blue shirt kneeling to present a glass cylinder to some kids. Inside the cylinder, tiny gossamer spheres pulsated calmly up and down the column as it turned over and over in the educator's hands. Instantly, I was kneeling right along with her and the children.

While she explained the basics of moon jellies – Aurelia species, whose sting is harmless to humans and whose stomachs glow orange to display their digestive process – all I could do was gaze helplessly at the creatures. I got the feeling that everyone around me was a bit disturbed by my self-insertion into what was clearly supposed to be a precious childhood moment. But I insisted upon not caring. I doubt I ruined anything for anyone, and moon jellies are my favorite. (Or, they were in that moment.)

At other aquariums, I'd seen the diaphanous animals with dents or even holes in their smooth bells, and I was wondering if this could be prevented with superior tank design and veterinary care. Once the youngsters moved along with their parents, I asked the educator about it. At this, she finally recognized in me a kindred spirit, and replied that the slightest bubble popping against the jellies' bells can burn holes in their tissue. Luckily, she added, they are capable of some regeneration, and don't seem encumbered by their scars. "I've seen about half of one jelly that was still swimming along just fine," she informed me. As our conversation progressed, all four of our eyes were glued to the clear pillar of little water sprites, their orange stomachs glowing within like a bloom of four-leaf clovers.

This marked the start of my day as a mermaid at the Monterey Bay Aquarium.

The Monterey Bay Aquarium is a non-negotiable item on your bucket list. You should visit at least once in a lifetime, whether you're a seasoned marine enthusiast or a landlubber indulging the most trivial curiosity about sea creatures. A converted sardine processing plant at the end of Steinbeck's famed Cannery Row, the expansive sprawl of chambers seems endless – much like a swath of tide pools bubbling around invisible as waves roll listlessly over an endless shore.

On the day our family visited, we lingered from opening time nearly to closing time. Even still, I'm certain we didn't discover all the secrets of the labyrinthine aquarium. While the confusing geography and signage nearly guaranteed we would miss something, what we did see reaffirmed my belief in mermaids and nourished my lifelong interest in ocean conservation.

The Aquarium's two floors are divided into two lobes each. Themed exhibits range from a makeshift shore teeming with friendly birds, to an "open sea" room that captures the eeriness of an "empty" ocean actually teeming with giant tuna, playful mahi-mahi, and sleek hammerhead sharks, to ¡Viva Baja! where tropical fish and reptiles from the mangrove and reef environments off southern California and the Gulf of California dart in colorful displays amidst educational placards explaining the science of these habitats and why they must be protected.

"Tentacles," a special showcase dedicated to cephalopods, presents a unique take on human-cephalopod relations across time periods and cultures, with the edgy Omar Rayyan print "Contessa and Squid" preceding several tanks of octopuses. A striped mimic octopus chilled in a corner; a ghost octopus put on a color-texture-change show as a video screen danced behind its tank. 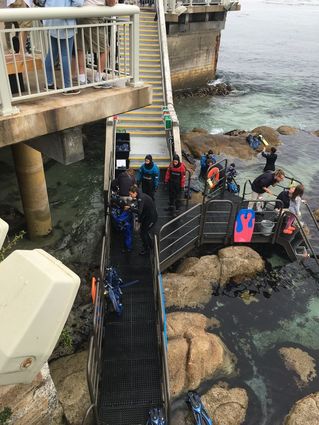 Almost unique to Monterey Aquarium, children 5-13 can don wet suits right in front of the Aquarium, in a controlled safe tidepool with personnel trained in both scuba and child care.

Conservation is a prominent theme throughout the Aquarium, which includes a whole room of art pieces made of disposable plastic, a heart-wrenching testament to the forgotten utensils and bags we throw "away," and facts on where that "away" really makes its misnamed landing: inside the stomachs of seabird chicks and in the once-thriving Northern Pacific Gyre. The environment information tended to impose a feeling of helplessness on me, since I was already well convinced to try to protect the ocean and saw few specific directions on how to do so in my lifestyle practices.

On a more positive note, my mermaid experience culminated on a second – or perhaps third? – visit to the Jellies section, where I watched orange sea nettles nudge one another like sentient balloons in the current, accompanied by the soundtrack of fellow visitors marveling at the same spectacle in such diverse tongues as French, Korean, Arabic, Spanish and Japanese.

If there is a way for an educated adult to revert to a mermaid state, I realized, it exists in a place where all the nations of the world blend into one ocean of learning, where empathy and passion is cultivated in a full 360-degree rainbow of minds. Never have I experienced such a perfect environment, until I discovered the Monterey Bay Aquarium. A delightful maze full of blenny-small and horizon-wide wonders, I am sure to be back.