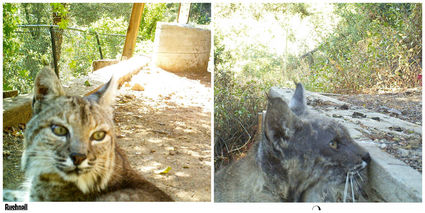 THOUSAND OAKS, Calif. -- When National Park Service researchers captured Bobcat 342, known as B-342, back in early July, the four-to-five-year-old male was clearly suffering from mange. He was outfitted with a GPS collar, treated with a topical solution, and released on site after blood and tissue samples were taken.

"Unfortunately, we continue to find that anticoagulant rodenticide is working its way up the food chain," said Joanne Moriarty, a wildlife biologist for Santa Monica Mountains National Recreation Area. "Of the bobcats that we've analyzed post-mortem, about 90 percent were found to have residues of the poisons in their livers."

Blood results from B-342 showed exposure to diphacinone, a first-generation poison that was also found in the blood stream of the Griffith Park mountain lion known as P-22. It is likely that both animals have been exposed to additional anticoagulant rodenticides that may only be detected post-mortem.

Mange is a condition caused by microscopic parasitic mites that burrow deep into the skin and cause severe itching, hair loss, and skin lesions. In bobcats, severe disease from the mites is thought to be more likely after the ingestion of anticoagulant rodenticide, or rat poison. Poisons used to control rodents work their way up the food chain, as illustrated in this infographic.

Bobcats, including B-342, have long been observed in the yard of Karin Benson, a resident of Topanga. "It's been a true joy to see him visit my yard for the past four years," said Benson, whose motion sensor camera trap picked up images of him. "But when he started looking emaciated and was losing hair, I became concerned something was happening."

When Benson contacted Moriarty about the animal, she learned that there were a limited number of GPS collars available for the study. Benson offered to donate a GPS collar to the park's nonprofit partner, the Santa Monica Mountains Fund, and also made her yard available so that Moriarty could set a cage trap.

Benson is pleased to report that recent camera trap photos of B-342 appear to indicate he has recovered from mange. Moriarty reports that the data locations from the animal's GPS collar also indicate a healthy range of movement.

Since 1996, the National Park Service has been studying carnivores in and around the Santa Monica Mountains to determine how they survive in an increasingly fragmented and urbanized environment. During the course of the study, biologists have studied more than 340 bobcats, 145 coyotes, and 50 mountain lions.

Bobcats (Lynx rufus) are small, spotted cats that inhabit most of North America, including all of the United States, most of Mexico and southern Canada. Often mistaken for mountain lions in Southern California, bobcats are much smaller and have a short tail, ear tufts and a pronounced facial ruff, similar to a beard. They typically weigh between 12 and 25 pounds.