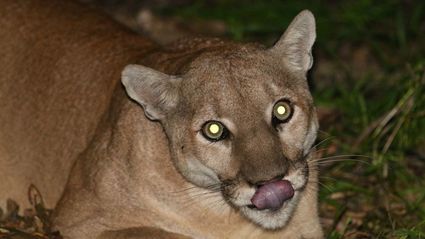 The male mountain lion known as P-45 moved into the Santa Monica mountains, but unfortunately seems to have developed a taste for alpacas and llamas. Residents complained, and the CDFW issued a shoot to kill order.

Update 12/1: An attorney for the woman who has the permit to kill P 45 said at a public meeting, that she would be happy to have CDFW relocate him instead. Ideally, to a nature reserve far away.

The male mountain lion known as P-45 moved into the Santa Monica mountains, but unfortunately seems to have developed a taste for alpacas. He ate 11 alpacas and a goat in the hills above Malibu on Saturday and Sunday following Thanksgiving. The unidentified ranch owner applied for, and the CDFW issued a shoot to kill order.

State officials said Monday that he is strongly suspected of breaking into two ranches in the hills above Malibu over the weekend and killing nearly a dozen alpacas and a goat.

The owner of one ranch where 10 alpacas were killed obtained a special permit Monday to shoot and kill the big cat, said Andrew Hughan, a spokesman for the state Department of Fish and Wildlife.

The so-called depradation permit gives the ranch owner the right to hire a hunter to find the animal and kill it, Hughan said. Typically, hunters use a deer carcass to lure a cougar and shoot it with a rifle.

The 10-day permit allows the hunter to scour the hills within 10 miles of the homeowner's ranch, located near Mulholland Highway and Little Sycamore Canyon Road. There, the lion attacked a herd of alpacas on Saturday night, killing 10 and injuring two others, Hughan said.

"The homeowner did everything she could to protect her wildlife," said Hughan, noting that the animals were kept in a locked area with barbed wire and motion-sensing security lights. "This lion was very determined to get in there."

In late November 2015, ranch managers at Malibu Family Wines discovered that P-45 had attacked one of several llamas in a pen shaded by oak trees at the 1,000-acre ranch. The lion returned a few days later and killed an alpaca.

Owners at the ranch opted not to seek a permit, but Jeff Sikich, a biologist with the Santa Monica Mountains National Recreational Area, said he eventually captured the animal. P-45 was released farther into the wild but returned in January 2016 and killed another llama, prompting the ranch to install lion-proof fencing.

Anticipating criticism of the permit to have the lion killed, Hughan called on the public to remember that a woman lost a significant part of her income as well as her pets. "If your livestock is killed, you have the right to get this permit," Hughan said. "This woman is obviously upset."

Last year, the state issued 265 permits to kill mountain lions that posed a threat to humans or livestock, resulting in the death of 107 of the big cats.

From the National Park Service:

We extend our condolences to those who have lost a pet or animal as a result of being preyed upon by native wildlife. This is extremely unfortunate for everyone.

Our partners at the California Department of Fish & Wildlife (CDFW) have issued a permit, as they are required under state law, for the mountain lion known as P-45 to be killed within 10 days. Although we conduct research on the local mountain lion population, CDFW is responsible for managing the state's wildlife. 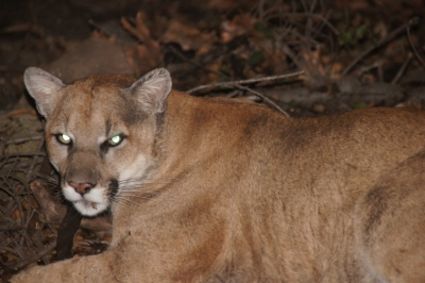 The male mountain lion known as P-45 moved into the Santa Monica mountains, but unfortunately seems to have developed a taste for alpacas and llamas. Residents complained, and the CDFW issued a shoot to kill order.

We respect the legal process that is currently underway, but also suggest that we all need to work together in the future to ensure that pets and livestock are safe and that mountain lions can continue to roam in the Santa Monica Mountains, as they have done for millennia. To that end, we are co-hosting a workshop tomorrow night with CDFW (http://bit.ly/2faU2sF) that will offer simple and affordable solutions to protect animals in safe enclosures. We have worked with a number of landowners in the past to develop solutions that have successfully protected goats and alpacas.

The only long-term solution to keeping mountain lions in these mountains is mountain-lion proof enclosures for otherwise defenseless animals. Eliminating P-45 does not solve the problem, especially given there are at least four mountain lions in the Santa Monica Mountains that have killed livestock over the past year. Nor is P-45's behavior abnormal or aberrant in any way, even if the number of animals killed is large. In a typical natural setting, animals flee from a mountain lion attack, but if animals are stuck in an unsecured pen, a mountain lion's natural response can be to prey upon all available animals.

We look forward to working with local residents and our partners to keep pets and livestock safe and also to keep these mountains wild.