60,000 workes are employed by offshore wind farms in Europe 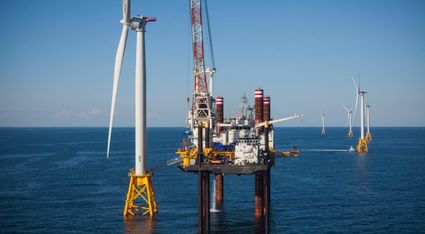 The project was developed by Deepwater Wind, a Providence, RI company invested in building offshore wind farms on both the east and west coasts.

Aside from generating pollution-free energy, this technology has the potential to create thousands of jobs and power millions of U.S. homes and businesses. The offshore wind industry in Europe employs nearly 60,000 workers, with approximately 2,500 wind turbines spinning in the oceans off their coasts. Developing the industry in America will increase our nation's competitiveness in the energy sector, revitalize industrial ports, bolster the manufacturing sector, and create good, high paying, jobs in the years to come.

The energy produced from the Block Island farm is linked to the New England grid in Rhode Island by a submarine transmission cable system.

"As the Ocean State, we're motivated by our shared belief that we need to produce and consume cleaner, more sustainable energy and leave our kids a healthier planet – but also by this tremendous economic opportunity." said Rhode Island Governor Gina M. Raimondo.

"With this project, we've put hundreds of our local workers to work at-sea and at our world-class ports."

"Rhode Island's tradesmen and women were proud to partner with America's leading offshore wind developer to help build this historic project," said Michael F. Sabitoni, President of the Rhode Island Building and Construction Trades Council. "We're confident that this is just the first of many offshore wind projects that will put Americans to work up and down the East Coast for decades to come as we commit to a renewable energy future." 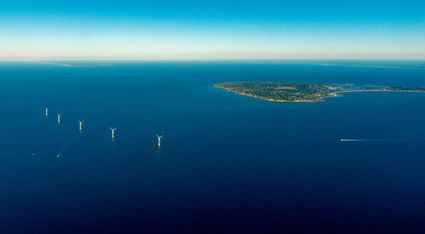 There are at least 10 additional offshore wind power projects in development and with the right policies, the U.S. Department of Energy estimates that potential exists for 86 gigawatts of offshore wind power capacity by 2050, which is enough to power 31 million homes (by 2050). Meanwhile, the rapidly advancing onshore wind industry provided almost 5 percent of U.S. electricity generation in 2015. Iowa and Texas have both nearly doubled their wind generation over the past five years, for example. The cost of generating electricity from new land-based turbines has fallen 61 percent since 2009 and onshore wind capacity, alone, is expected to grow by 70 percent by 2021 as a result of the federal tax credit extensions and other policies.

U.S. Senator Sheldon Whitehouse said "This is a historic milestone for reducing our nation's dependence on fossil fuels."