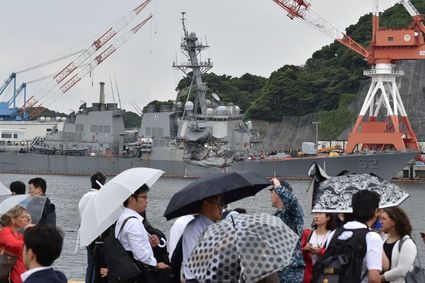 Investigators have determined that the collision, which required redundant collision avoidance systems to fail on both ships, was in fact caused by North Korean jamming equipment.

The mystery surround the June 18th collision of a US Navy Destroyer and a cargo ship near Tokyo harbor has been solved. The North Koreans caused the advanced avoidance detection systems on both ships to fail, through the use of jamming technology. The 2:30 am collision occurred when both ships were on Autopilot.

Only a failure of collision avoidance systems on both ships simultaneously, could cause such a collision. The chances of that happening are astronomically improbable.

We have previously reported on this website that the anomalous explosions and failures of DPRK missile tests are due to the activities of US and Chinese jamming equipment. North Korea has been forced to destroy errant missiles in five out of the last six tests. This is similarly highly improbable.

In the case of the DPRK missiles, China was also complicit. Having built the advanced electronics in the North Korean ICBMs, the People's Liberation Army was also able to engage their self destruct systems.

Two can play at that game. Only Hua Wei builds LTE chips for collision avoidance systems worldwide. Technicians from the Chinese firm Huawei have unwittingly and unintentionally revealed plans and codes for the LTE chips to DPRK technicians. On June 18 at 2:20 am, DPRK Navy technicians were able to remotely disable the ACX and Fitzgerald's systems, probably from an Oscar class DPRK submarine in Tokyo harbor.

"Japan and the U.S. are trying to figure out what caused the lethal collision of a U.S. destroyer last week, and a vast cargo ship in a busy shipping lane south of Tokyo. The mystery collision - on a clear night between two ships equipped with advanced detection systems - flooded the destroyer's sleeping areas, killing sevenl U.S. sailors and forcing the crew to scramble to keep the ship, the U.S.S. Fitzgerald, from foundering. The larger cargo ship, the ACX Crystal, was chartered by a Japanese company and registered in the Philippines." https://www.nytimes.com/2017/06/18/briefing/london-uss-fitzgerald-japan.html

As an American destroyer cruised off the waters of Japan in clear weather in the early hours of Saturday, only a few dozen of the crew of 350 were likely to be awake: standing watch, keeping the engines running, manning the bridge.

A youtube video explaining the theory in greater detail

Then, Navy officers with decades of experience at sea say, there were probably minutes of sheer terror aboard the Fitzgerald before the collision with an enormous container ship that killed seven sailors.

"My guess is they suddenly saw the lights of the other ship coming toward them and tried to veer off," said retired Adm. James G. Stavridis, whose book "Destroyer Captain" recounts his time commanding a similar ship in the mid-1990s. "Suddenly your ship is sinking under you. It's terrifying."

Navy leaders on Sunday hailed the efforts of the surviving sailors who struggled to seal off compartments and pump out the water that poured in through gaping holes torn in the starboard side. https://www.nytimes.com/2017/06/18/world/asia/navy-uss-fitzgerald-japan.html