Planets are only 38 million miles apart, and Mars appears as a bright disc in the early evening sky 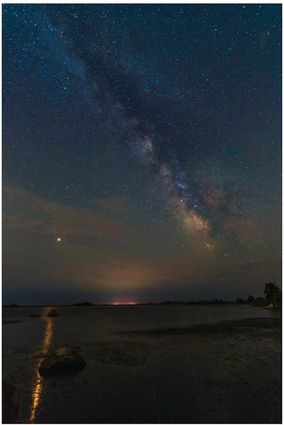 Mars, closer than it's been since 2003, reflecting off the Atlantic Ocean in Rhode Island

A poster on Reddit recently shared this photo of Mars reflecting off the early evening sky, as it rises in the East.

"Right now Mars is closer and brighter than it's been since 2003. It's so bright it's casting a reflection on the ocean as it rises. Took this two nights ago in Rhode Island," writes the Reddit poster, Advillious.

"The milky way is fully visible with the naked eye in fully dark conditions. In areas like that you can also see so many stars that it's difficult to distinguish constellations. They start to fade and blend together into a starry blur,"writes another,

Mars can easily be seen from Earth with the naked eye, as can its reddish coloring. Its apparent magnitude reaches −2.91, which is surpassed only by Jupiter, Venus, the Moon, and the Sun. Optical ground-based telescopes are typically limited to resolving features about 190 miles across when Earth and Mars are closest because of Earth's atmosphere.

On average, the distance to Mars from Earth is 140 million miles (225 million kilometers), according to NASA. However, the distance to Mars from Earth is constantly changing. Like a pair of cars on a racetrack, Mars and Earth orbit the sun at different speeds. Earth has an inside lane and moves around the sun more quickly. Plus, both have elliptical orbits, rather than perfect circles.

In theory, the closest the planets could come together would be when Mars is at its closest point to the sun (perihelion) and Earth is at its farthest point (aphelion). In that situation, the planets would be 33.9 million miles (54.6 million kilometers) from each other. But that has never happened in recorded history. The closest known approach was 34.8 million miles (56 million km) in August 2003. 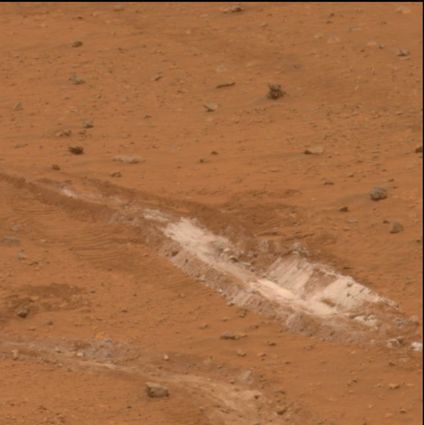 Exposure of silica-rich dust uncovered by the Spirit rover. Mars appears red because, it is.

Incidentally, that closest approach kicked off asocial media trend. Every August, posts, memes and emails claim that Mars will appear as large as a full moon. In 2003, "someone somewhere pointed out that at a magnification of 75x in a telescope, Mars would appear as big in the eyepiece (half a degree wide) as the Moon does unmagnified," Sky & Telescope's Alan MacRobert explained. Not only did the chain letter get rewritten to omit the magnification, it also continued to spread long after 2003.