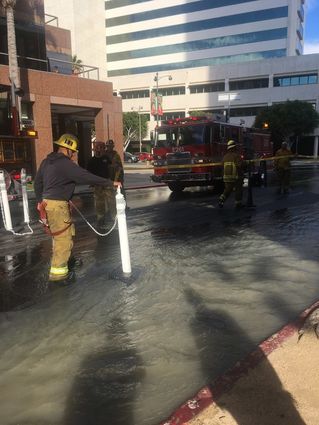 A major water main break at Wilshire Boulevard and Masselin flooded streets in mid Wilshire Thursday morning at 10 AM. LAFD units responded and blocked off the street, but then departed. This is the 5700 block of Wilshire Blvd, which has been called LA's main street. 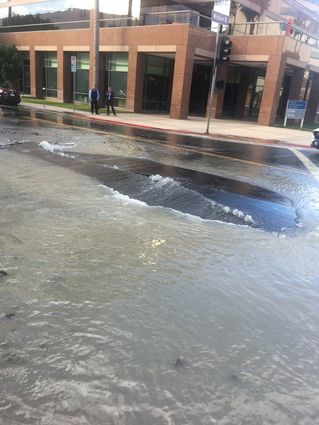 The amount of water was annoying and disrupted traffic. However, it could not compare to the July 14, 2014 watermain break at UCLA when Streets turned into rivers and parts of UCLA turned into lakes after a massive water main break sent 8 million to 10 million gallons of water gushing through parts of Los Angeles.

The deluge was so massive that swift-water rescue crews with boats had to ferry away several stranded people. At least three motorists were rescued from underground parking garages where stairwells had turned into raging waterfalls. Dozens of vehicles were partly submerged, UCLA said. At least two of the inundated garages belong to the university.