Homeless Man Charged with Setting the Skirball Fire, Other Fires in the Sepulveda Pass 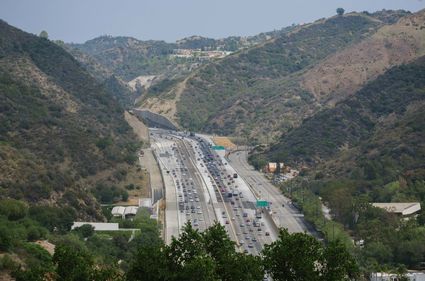 Charges have been filed against a homeless man who allegedly set a number of fires near Sepulveda Boulevard and Getty Center Drive on Easter Sunday, April 21. Steven William Adkison, 31, now faces four felony counts of arson of a structure or forest.

A good Samaritan saw the defendant setting the fires and struggled to restrain him until police and firefighters could arrive. This brave citizen, unnamed in the LA County District Attorney's Office press release, undoubtedly saved many structures and lives.

In December of 2017, the Skirball fire burned for over a week, scorching the hillside of the Sepulveda Pass, destroying 6 structures, and damaging 12. The fire closed the Skirball Cultural Center, the Getty Center, and the Bel Air Country Club. Classes were cancelled at UCLA, Santa Monica-Malibu Unified School District, and Santa Monica College. Mount Saint Mary's University had to be evacuated. The 405 Freeway was closed.

Later, it was determined the source of the fire was an illegal cooking fire at a homeless encampment in the Sepulveda Pass.

Southern California is naturally fire-prone. In fact, the native plants and animals depend on a natural fire cycle. Summer fires, usually calmer, can burn from June through September. But when the dry Santa Ana winds pick up in the autumn, they can drive devastating fires from October through April. Before human beings lived in the area, fires were started by lightning. Fires typically began at high elevations, where lightning is more common, and burned toward the coast, naturally extinguishing fairly quickly.

Once humans moved in, that changed. Native Americans would purposefully set fire to the brush in order to gain access to game or promote the growth of desired plants. Today, most brush fires are caused by careless human activity.

Over 50,000 homeless people are estimated to live in Los Angeles County, many of them on the street rather than in shelters. It is unknown how many of these homeless people are mentally unstable or whose cognition is impaired by substance abuse. It is a good guess, however, that the number of such mentally unstable individuals is high. According to the Treatment Advocacy Center, California gets a D- grade when it comes to Civil Commitment Law. The standards for getting a mentally unstable individual involuntarily committed are ridiculously high. In addition, the number of psychiatric beds per 100,000 people should be 50. In our state, it is only 15.1.

Until we make a commitment as a society to get help for people who are unable to function in society - and ensure their safety and our own - we will continue to live in danger of the unpredictable, costly, and sometimes deadly acts they may perpetrate.