Local baseball player remembered three weeks after his passing. Private memorial will be aired tonight at 7 PM on Fox. 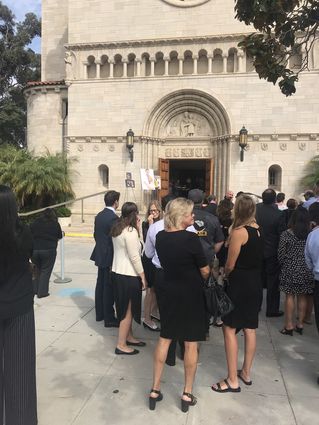 Memorial service for Tyler Skaggs. The steps of Saint Monica Catholic Church about an hour before the service begin.

Three weeks after his death, Angel's pitcher Tyler Skaggs was memorialized at Saint Monica's Catholic Church. The memorial service began Monday 7/22 at 11 AM.

Admission was by invitation, and the memorial service wasn't publicized in advance. The private memorial will be aired tonight at 7 PM on Fox Sports Network. Busses brought in the Angels, who are not playing a scheduled game today.

"There will be no body. Tyler was cremated, and his ashes have already been scattered," explained one of the ushers.

The former santa monica high school pitcher died on July 1, overnight in a hotel room in Texas. The Angels had played there the day before. Authorities have not released his cause of death. 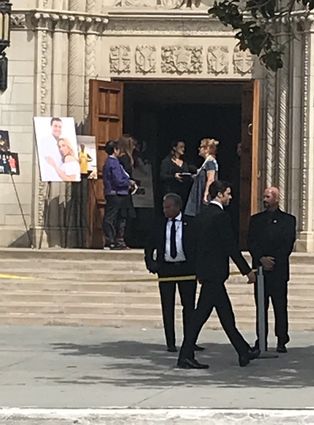 Baseball players were seen hugging each other and each other's wives as people walked past the press and into the 100-year-old church. A large photo of Tyler Skaggs and his wife Carli, was visible on the steps of the church. The couple had been married just nine months ago.

Tyler's mother Debbie Skaggs is a physical education teacher at santa monica high school. She threw out the first pitch at the Angels Mariners game two weeks ago.

Security was tight, with a security agent checking press credentials. The press listened to the service on a monitor outside, chatting as they waited for a chance to film attendees leaving the 3 hour memorial service.

Skagg's 28th birthday would have been July 13th.