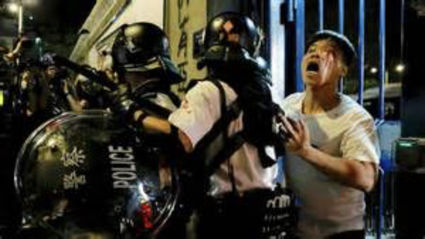 With Hong Kong is paralyzed by a general strike, Beijing appears to have lost patience with its restive former British colony. The extradition law that initially sparked the protests has been withdrawn, but the protests have continued and China has decided to show who's in charge in this City of 4 million Chinese people.

The People’s Liberation Army will mobilize and take control of the streets by Friday, according to mobilization orders released to the local press.

On the eve of Thursday's anniversary of the army's founding, the Hong Kong Garrison of China's People's Liberation Army posted on its official social media account a three-minute video showing soldiers rappelling from helicopters, aiming sniper guns and, in one sequence, throwing tear gas at a crowd dressed as civilians. This was a hint of things to come.

The commander of the People’s Liberation Army (PLA) garrison in Hong Kong warned it was “determined to protect national sovereignty, security, stability and the prosperity of Hong Kong”, reports the Guardian newspaper.

The remarks were made by Chen Daoxiang on Wednesday at a reception celebrating the 92nd anniversary of the PLA. They came the day after 43 protesters were charged with rioting and released on bail. Some of those charged were as young as 16 and included a Cathay Pacific pilot.

The PLA chief also gave his “firm” support to Hong Kong’s chief executive, Carrie Lam, as well as to to the Hong Kong police force for “rigorously enforcing the law”.

At the reception, the PLA released a video showcasing the army. In one scene, an anti-riot drill was shown where ranks of marching soldiers holding riot shields advanced and fired on fleeing “citizens”. The scene included footage of tanks rolling in, water cannon being used, and “handcuffed” citizens being led away.

A soldier was seen shouting in Cantonese, the language spoken in Hong Kong rather than mainland China: “All consequences are at your own risk.”

Chief Executive Carrie Lam suspended the extradition bill on 15 June[38] and further declared it to be "dead" on 9 July, using an ambiguous Cantonese phrase (壽終正寢 ) that may be translated as "dying a peaceful death".

However, she did not state that the bill would be fully withdrawn from the legislative process and has not addressed other protestors' demands. Executive Council members Regina Ip and Bernard Charnwut Chan have stated that the government does not intend to make further concessions. Instead, it will focus on preparing a policy address in October and wait for protestor momentum to slow before District Council elections in November.

Protests have continued through the summer, often escalating into heated confrontations between police, democracy activists, pro-Beijing triad gang members, and local residents.[45] As demonstrations continue, protestors have increasingly called for direct elections to choose Legislative Council members and the Chief Executive, an issue that itself triggered mass protests in 2014.