Residents are not allowed to enter Montana Avenue to Idaho, Lincoln to 10th St as police search for an armed suspect 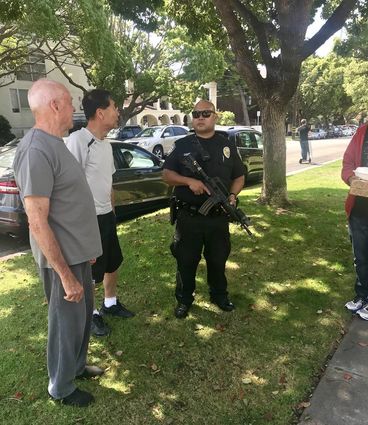 Update 3:50 pm: The shelter in place order has been lifted. The suspect was NOT located. We understand this has been very stressful on the community and appreciate your patience and understanding. We will continue to provide updates should any additional information become available. -- tweet from @santamonicapd

Update 2 pm: Police pull back the perimeter to North of Idaho Avenue. Residents South of Idaho may come and go as they please.

Update, 1:35 I see no sign the police are breaking down their command center, from my position at Lincoln and Montana, near the Police command center. Despite reports, this has not turned into a barricade situation.

Over 100 officers from 5 agencies are participating in this search. SMPD, LAPD and LASD were joined by Inglewood and BHPD.

Update, 1:15 pm: Police have set up a command center in front of Roosevelt Elementary school, blocking the commercial street from Lincoln to 10th Street. They say one witness saw the suspect get into a red SUV, while a different witness told police he saw the suspect hide in a parking enclosure off the alley. Police say therefore the chance is 50/50 that he is still in the area.

"We ask residents to shelter in place because there are police canines involved in the search, and you can imagine how they might go off lead," one detective told us.

SMPD Tweet: At approximately 9:51 AM a MASKED suspect entered Wells Fargo on Montana and 9th armed with a shotgun type firearm and demanded money. Loss=Unknown; Officers continued a coordinated grid search of the area. Please continue to shelter in place.

Update 11:45 SM police remain convinced the suspect is still in a 4 block area. A police helicopter is circling overhead. police are searching for an armed bank robber who robbed the Wells Fargo Bank on 9th Street and Montana Avenue, while wearing a skeleton mask and blue shoe covers.

Witnesses say they saw the suspect walk off of an alley into an underground parking garage. The suspect is described as a male black 6 foot 4, 200 lbs, armed with a double barreled shot gun.

An SMPD officer with a rifle was seen standing in the intersection of 9th Street and Montana Avenue. Streets were blockaded, residents were not permitted inside a 4 square block area.

At 10:07 am, @SantaMonicaPD tweeted: "Police activity near Montana and 9th. Please avoid the area. More information to follow as the situation progresses." 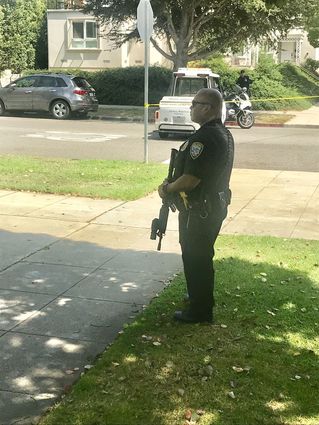 At 11:30 " they tweeted SM Alert - All residents and businesses on Montana Avenue from 9th Street to 11th Street are asked to shelter-in-place due to police activity in the area. Please remain indoors. Close and lock all windows and doors. "

A policeman told a resident this follows an armed robbery on Montana Avenue, where the suspect was armed with a shotgun. He is described as a black male with blue shoe covers.

This is ordinarily a quiet and safe neighborhood. The bank is located across the street from Roosevelt Elementary School, which was locked down. The school reported that everyone was safe, and the suspect was not believed to be on campus, but it was locked down as a security precaution anyway.