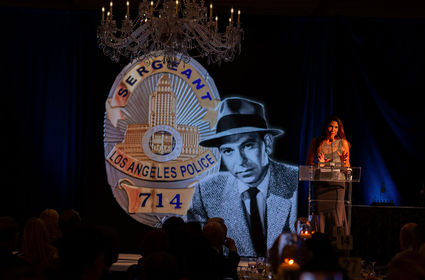 Christine Devine as the host of the evening

The Los Angeles Police Museum rolled out the blue carpet on September 27, 2019, for the annual Jack Webb Awards –a prestigious event named in honor of the legendary director of the popular television shows, Dragnet and Adam-12. This event was to honor the 150th celebration of the Los Angeles Police Department, and their finest were honored for their role in making sure one of the greatest cities in the world is safe every day.

Over 400 leaders, from business, law enforcement, political dignitaries, entertainment, and philanthropic communities attended this historic event, recognizing the stellar and influential life of Jack Webb and the storied 150 years of the LAPD. Historical and current LAPD vehicles greeted the guests on display, and they were treated to a 3-course gourmet dinner during the awards gala program. To support new youth programs and community initiatives, guests also participate in silent and live auctions throughout the night, which raised funds for this great cause.

Ms. Devine spoke eloquently, "I am grateful to once again being a part of the Jack Webb Awards as you honor the good works of law-enforcement and acknowledge portrayals in the world of entertainment. As the granddaughter of a volunteer firefighter, and grand-niece of a state trooper, I look forward to sharing this night with you and your families."- 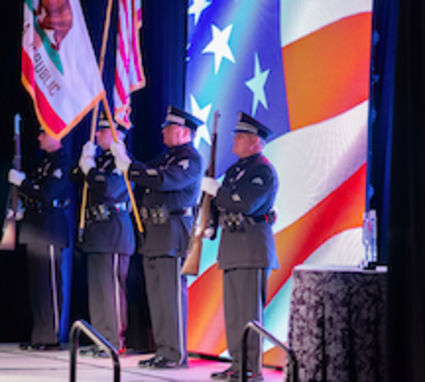 singing of the National anthem

For guests who were new to the LAPD family, they got a glimpse of the deep camaraderie that exists amongst law enforcement personnel. The evening was fun and a lot of funds were raised by the silent as well as live auctions, which included spectacular trips to exotic destinations around the world as well as priced memorabilia.

It was a fantastic evening, where LAPD's fines gathered under one roof to celebrate the men and Women in Blue for doing such a great job of keeping the streets of LA safe every night and risking their lives for the safety and security of their community. The public is of course always welcome to visit and support the Los Angeles Police Museum and its projects. It was a successful evening and we look forward to highlighting more of LAPD's achievements in the future.