On October16 ,the Los Angeles School Police found the stolen vehicle with someone sleeping inside 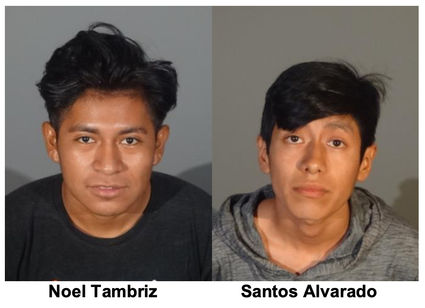 On October 15, 2019 a group of three males carjacked a victim in the area of 17th and Bryn Mawr Ave, writes SMPD PIO Lt. Candace Cobarrubias. One of the suspects used a handgun and pointed it at the victim. The suspects also stole the victim’s wallet and cellular phone.

On October16 ,the Los Angeles School Police found the stolen vehicle with someone sleeping inside, she wrote.

A replica handgun was found inside the vehicle and the individual was arrested. Detectives were able to trace the actions of this suspect and found him to be in the area during the time of the carjacking and were able to obtain surveillance photos of the other two suspects.

Santa Monica Detectives worked with Los Angeles School Police to identify the other two suspects and they were taken into custody. Two of the suspects were adults and the other a juvenile.

The primary suspect Noel Trambriz (08-24-1996) from Los Angeles was sentenced to three years in prison. Santos Yonathan Alvarado (02-03-2001) from Los Angeles is still in custody and will return back to court in February 2020. The minor was taken to Eastlake Juvenile Hall.