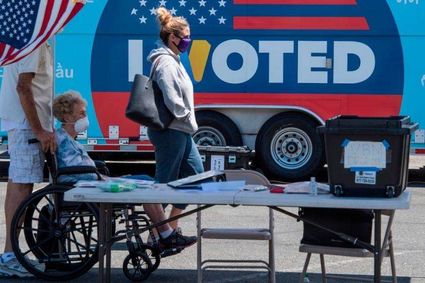 The Los Angeles county registrar of voters has released the following results as of 10 PM Pacific standard time, Tuesday night. The winner of the selection will only serve until January. Both candidates will face off again in November.

This is a special election to fill the Congressional seat of Katie Hill, who resigned in some controversy over her plural marriage and an ex husband who posted embarrassing photos of the Democratic Congresswoman. The seat is in Santa Clarita and North East Los Angeles county.

Some experts expect Christie Smith to prevail in the November election, since fewer Dems cast ballots in special elections. They add that this is the first California Congressional seat taken by the Republicans in 22 years; first US seat flipped from the Dems to Republicans in 9 years.

Mike Garcia defeated his Democratic opponent Christy Smith in the race for California's 25th Congressional District seat, left vacant by former Rep. Katie Hill (D-Calif.), who resigned last year after it was revealed she had an inappropriate relationship with a staffer.