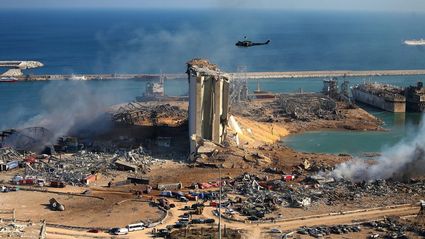 Downtown Beirut, once the middle east's most beautiful city, is in ruins.

8/5/20: Before and after photos of the blast, show the port of Beirut scorched and lifeless. The photos from Planet Lab, are visible at the bottom of this story.

Lebanese sources report that the welding of a door caused sparks which ignited 2,750 tons of ammonium nitrate, which caused explosion at Beirut Port Tuesday. The explosion first touched off a fire with gray smoke. Moments later, a huge explosion shook the entire city, and a mushroom cloud filled the sky.

Here are the facts as of Wednesday, according to AFP: - Lebanese Red Cross says more than 100 people are dead and thousands are injured from the explosion

- Beirut Governor Marwan Abboud said over 300,000 people are homeless after the blast and the damage extends through half of the city

- A search and rescue operation for survivors started on Wednesday morning

- Lebanon's prime minister cites ammonium nitrate as the likely cause

On the evening of 4 August 2020, at 18:08 local time, multiple explosions occurred in the city of Beirut, the capital of Lebanon. The blasts occurred at the Port of Beirut and left more than 113 people dead, 100 more missing and more than 4,000 people injured. 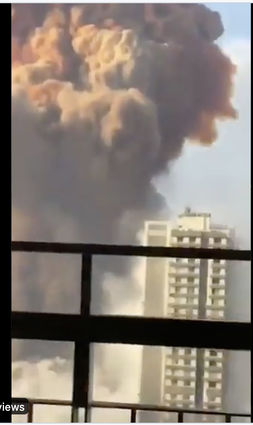 Video from an apartment showed the massive Beirut harbor explosion.

Beirut Governor Marwan Abboud estimated that between 200,000 and 250,000 people were left homeless by the explosions The Director General of Lebanese General Security stated the main explosion was linked to approximately 2,750 tons of ammonium nitrate that had been confiscated by the government and stored in the port for the past six years at the time of explosion. The explosion is believed to have had equivalent effects to a few hundred tonnes of TNT.

Beirut is the capital and largest city of Lebanon. No recent population census has been conducted, but 2007 estimates ranged from slightly more than 1 million to 2.2 million as part of Greater Beirut, which makes it the third-largest city in the Levant region and the fifteenth-largest in the Arab world. Located on a peninsula at the midpoint of Lebanon's Mediterranean coast, Beirut is an important regional seaport.

It is one of the oldest cities in the world, having been inhabited for more than 5,000 years.