The fire has burned 113,000 acres, an area the size of Denver, Colorado 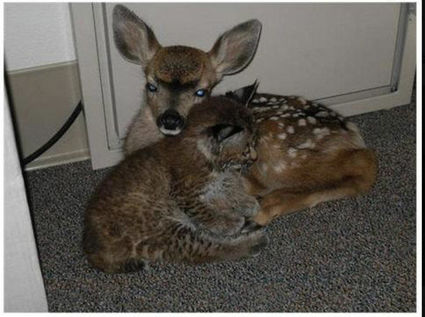 Baby deer & bobcat found after a forest fire put in room together & they were found like this!

"Baby deer & bobcat found after a forest fire put in room together & they were found like this! (Credit Lisa Mathiasen)" reads a Twitter post, together with this adorable photo.

"This is a lesson that we should all learn to live together," tweeted Zulma E Ruiz.

"It's like the Fox and Hound story, but without the Fox or the Hound!" tweeted Tam Tam.

The Bobcat Fire in the San Gabriel Mountains has burned over 113,000 acres, an area the size of Denver, Colorado.

This fire is the source of most of the smoke over the Westside this week. The fire is one of the largest fires ever in Los Angeles County.

However firefighters did make progress. They achieved 38% containment of it by sunrise Wednesday, more than Tuesdays percentage.

Authorities continued to investigate how the fire may have started, apparently power lines are the focus. 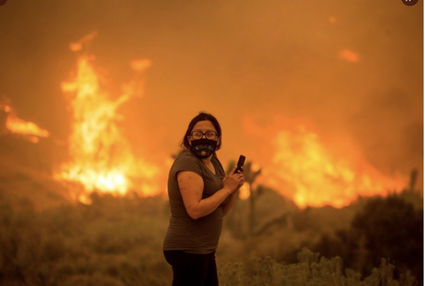 The cause of the Bobcat, which has blackened 113,307 acres, remains under investigation.

As a part of that investigation, federal officials are looking at Southern California Edison equipment. SCE experienced a problem the same day the blaze started, according to a report filed by the utility company with the state's utility regulators last week.

On Sept. 6, a section of Edison's circuit experienced a relay operation at 12:16 p.m., the report said. The operation happens when the circuit is interrupted by things such as wildlife, debris, fog, smog, or smoke.

David Song, a spokesman for Southern California Edison, noted that a camera installed by Edison on Mount Wilson captured images of smoke as early as 12:10 p.m., prior to activity on the circuit.