Maglula, Ltd., which makes popular magazine loaders for firearms, alleges they repeatedly warned, then purchased counterfeits of their trademarked and patented products from Amazon 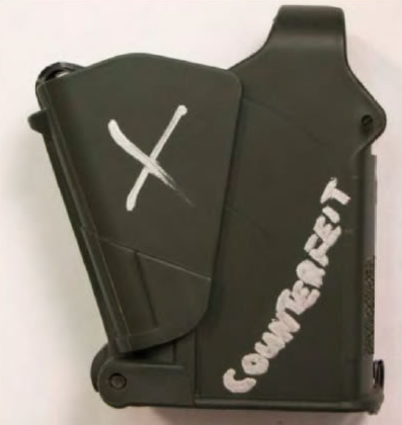 December 9, 2019, Los Angeles, CA – Amazon repeatedly makes its illusory public claim that counterfeits are not allowed on Amazon, but that is a lie. Amazon is a voracious seller, enabler, and facilitator of an inexhaustible supply of counterfeit, fraudulent, and replica products. 200,000 brands are fighting Amazon fakes, and now one manufacturer, exhausted from endless warnings and complaints, is taking the e-commerce gorilla to the mat.

Maglula, Ltd., which makes popular magazine loaders for firearms, alleges they repeatedly warned, then purchased counterfeits of their trademarked and patented products from Amazon as a direct seller and through Amazon's platforms from third-party marketplace sellers.

In one example, Maglula identified a counterfeit Amazon purchase and returned it to Amazon clearly marked "counterfeit" (below). Shockingly, Amazon listed it for resale through its return center, 'Amazon Warehouse' and Maglula purchased the same marked item. From the Maglula v. Amazon complaint:

Fakes, replica, and fraudulent items are common in Amazon Warehouse selections and resold to consumers without quality or authenticity screening. "Amazon has become so overrun with counterfeit products-and its meager efforts to address this problem have been so ineffective-that counterfeit products are now leaving Amazon warehouses all over the United States at an alarming rate" states the Amazon complaint, adding "Amazon feigns ignorance and portrays itself helpless when it comes to providing sufficiently detailed noninfringement positions on the accused products."

US District Court Judge Ivan Davis for the Eastern District of Virginia ordered Amazon to make its inventory of over 33,000 'accused products' – stored in roughly 200 facilities around the US – available for inspection by Maglula within five days. This is thought to be the first time that such an inspection order has been made against Amazon in connection with counterfeit goods. The online retail giant has argued that the accused products avoid infringement because they were never sold, says a report from Securing Industry.

The accusations against Amazon are not new or unique. Amazon's ineffective processes to stop the sale of knockoff products do not apply to unregistered IP, such as trademarks protected by common law, and are easily circumvented by Amazon's business partners.

An admission by Amazon's Vice President of Customer Trust, Dharmesh Mehta, confirms that buyers may not receive products from sellers they order from, but commingled products (including fakes) from Amazon's closest fulfillment center.

"Rather than permitting discovery, Amazon resorts to litigation tactics to frustrate and limit Maglula's access to information regarding the nature and full extent of Amazon's infringing conduct," states Maglula's complaint.

Amazon is no stranger to bullying complaints and is facing formal antitrust charges in the EU with a fine of up to $37 billion and a bullying and antitrust investigation by the US Congress.

For years, Amazon successfully thwarted lawsuits for the sale of counterfeits, and over 60% of products sold on its platform, claiming they are "merely a venue" for the sale of such products, as opposed to now being the actual seller. Counterfeit and fraudulent products have been attributed to injuries and death, prompting lawsuits against Amazon.

"Maglula's complaint against Amazon shows that Amazon has been selling counterfeits and other products that infringe Maglula's intellectual property. Maglula notified of the infringement beginning in 2016 and subsequently asked Amazon to cease and desist the sale of infringing products. Amazon did not stop, and Maglula ultimately had no other choice but to seek the help of the US legal system. It is my hope that my lawsuit leads to improvements at Amazon that will benefit all IP owners who have found counterfeits and knockoffs on sale at Amazon's website." -- Guy Tal, CEO, Maglula, Ltd.