South Los Angeles is experiencing a murder epidemic, as Murder in the First 3 Weeks of 2021 Up 150 percent

LAPD equine patrol on an empty Venice beach in summer of 2020.

Sunday night, 1/18, the Los Angeles Police Department sent two rather shocking tweets. Victims Shot in South LA are up 742% compared to last year, says the LAPD. And homicides are up 150% in the first two weeks of 2021, over the same period in 2020.

"Tonight, we are saddened to share some shocking crime stats," reads the tweet from LAPD HQ. "16 days into 2021, and Homicides in South LA are up 150% compared to last year. " 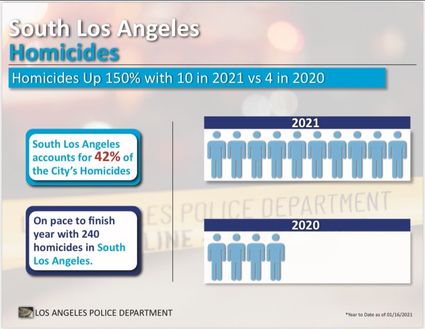 "Victims Shot in South LA are up 742% compared to last year," continues LAPD HQ in a second tweet.

"This tragic continuation of gun violence, primarily concentrated in our most disadvantaged neighborhoods, must stop. Gang Interventionists are trying...but we must all work together to stop the violence-to save lives."

Formerly called South Central, South LA is a traditionally African American neighborhood. Significant numbers of immigrants from Latin America have moved there in recent years. The Coliseum, the natural history museum and the University of Southern California are also located in the neighborhood.