Bernie Sanders Reflected in Monolith in Utah Desert, Next to Bruce Springsteen, in Famous Paintings. 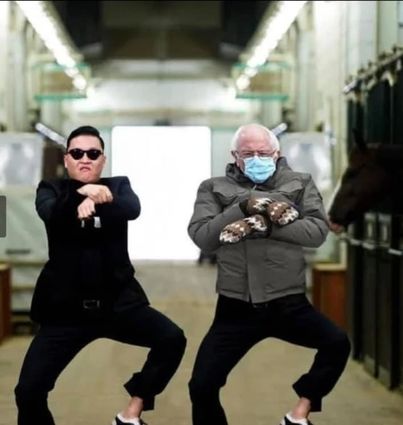 Some say we Americans are fascinated with winners. But sometimes we are just as fascinated with losers. Take Bernie Sanders, for example. The old communist has run for President since I was in Grade school, never coming closer than runner up for the Democratic nomination. But now the commie from Vermont is making bank (for charity) off his cold discomfort on January 21.

During the Inauguration of Joe Biden on January 20, 2021, a photograph of Vermont senator Bernie Sanders was taken. The photograph depicts Sanders sleepily resting on a chair wearing winter clothing, most notably a large, fluffy pair of mittens. This thing has gone super viral, and why not? Americans needs a non partisan reason to have some fun. We can relate; we've all been to that boring meeting, where we were just waiting for it to be over. 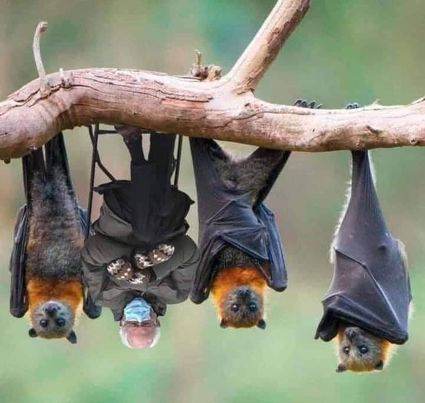 Bernie hanging upside down with Bats

There is Bernie in the Boulevard of Broken Dreams painting, and two paintings by Grant Wood. Bernie is with the Queen of England, and OJ Simpson is trying on his gloves. Bernie is with the Spice Girls and the cast of friends. And you can put any pet you want into his lap.

What does Bernie Sanders himself say about this? During an interview on “Late Night with Seth Meyers” Thursday, Sanders said he had no idea the photo of him had become an internet sensation.

“I was just sitting there trying to keep warm, trying to pay attention to what was going on,” he told Meyers.

Sanders credited Jen Ellis, a Vermont schoolteacher, for making the mittens he wore. According to Ellis, the mittens are created from repurposed wool sweaters and lined with fleece made from recycled plastic bottles.

The senator’s campaign store released a sweatshirt featuring the meme, with 100% of proceeds going toward Meals on Wheels Vermont. The crewneck has since sold out.