The Verdict: Derek Chauvin found guilty on All Three Charges.

Law enforcement braces for riots in downtowns throughout the US. Stores on Montana Avenue were boarding up despite the guilty verdicts. 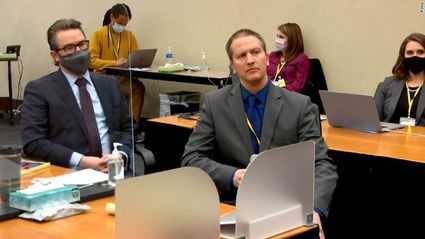 Derek Michael Chauvin with his lawyer at his trial in Minneapolis

The emotional decision seemed fitting, given the video of the incident. The jury was polled and each of them agreed it was his or her true and correct verdict.

In Santa Monica, stores were boarding up despite the guilty verdicts. Santa Monica was hit with rioting and looting on May 31, 2020, even though the City has a progressive political bent and of course, had nothing to do with George Floyd or his death.

Chauvin is the Minneapolis, MN police officer who famously kneeled on the neck of George Floyd, a middle aged black man with a drug problem. Numerous onlookers filmed the death of Floyd at the hands of 3 or 4 Minneapolis police officers, lead by Chauvin. At least 3 bystanders begged Chauvin to allow Floyd to breathe. The two men seem to have known each other. Chauvin is charged with degree murder, second degree manslaughter and second degree murder.

The killing of George Floyd on May 25, 2020, at the beginning of the coronavirus pandemic and lockdown, touched off a wave of national rioting and looting which included violence and looting in Santa Monica and Los Angeles. Protests were held in cities around the world.

Derek Michael Chauvin is an American former police officer undergoing a trial on murder charges in the killing of George Floyd in Minneapolis, Minnesota, on May 25, 2020. During an arrest made by Chauvin and three other officers, he knelt on Floyd's neck for about nine minutes while Floyd was handcuffed, lying face down on the street calling out "I can't breathe."