By Michael Kerr
Special to the Observer

The pandemic we're now in is Stupidity Pandemic 21. Why did Jeff Bezos blast off in the middle of it? 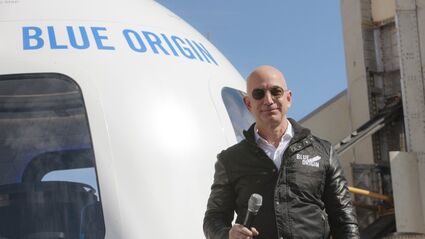 Last week, just as Jeff Bezos blasted off from our overheating, burning, flooding, Covid-ridden planet, something happened. I'll leave it up to you dear reader to determine what. Hint: you don't get to joy-ride into space. WARNING: The following is dark-ish.

The pandemic we're now in is Stupidity Pandemic 21; more dangerous than anything humanity has ever dealt with. What's at hand is nothing less the breakdown of civilization & its institutions and a more and more rapid loss of control; we're now living in the early stages. And Standby for WW3-- JUST KIDDING!!

Except not about the stupidity pandemic... people have been lulled into online life complacency by their TV screens, computers, phones...with thoughtless compliance. Who are they? Who are YOU? Call it the Covid side-effect breakdown of the human brain.

What happened was, the Delta virus caught the vapor of Bezos's cowboyrocket; instantly mutating into the most dangerous lethal virus humanity has ever been plagued with: the Stupidity Pandemic. Hereon, those of us over forty will age well within whatever our wisdom and experience and at EOL (End Of the Line, as opposed to IRL) we'll recall the idyll of early 21st century LA, her green lawns and blue pools in the desert. Those under 40 will occasionally ask us what it was like before the Earth was in constant drastic environmental eruption. A grasp at a past which they won't believe watching ancient online videos (in-brain implanted-- you'll just switch to "videos" in your mindsearch for, the way you now can with "memories" and "imagination"). Authentication will also be a thing of the past.

I'm glad yet sad I'm in that older group; although among the privileged multitudes not guilty, I've been an environmental activist since the '80s. But this isn't about me, it's about the Earth and the 7B of us; and those 2B accountable moving forward. Who are they you might ask? They're the purposely greedy powerful and their naively herded who want in on the action, like the latest shiny Nikes. Bezos is their figurative leader who delivers shoes. Not since the ice age encroached has there been such a humanitarian challenge. Back then, Sapiens' global population dropped from 1.5M to the 10,000 we're all descended from. But that wasn't our fault, this is.

And now some Zen...the Coronavirus Pandemic provided a yin/yang moment, which the Japan Olympics, despite IOC flaws, has symbolized to the positive yang. Perfect timing. The human race is creative, loving, heroic, alongside its bad yin. Vaclav Havel, no stranger to Buddhism, or at least Frank Zappa, wrote eloquently of hope from his jailcell forty years ago then became Chekoslavakia's yang President. His spirit still inhabits Eastern Europe (Kafka? Not today). Yet Hope is now not enough, action must occur. Action isn't unrealistic in this daunting 3rd decade of the new millennium. Powerful, greedy people want to make money, consumers want to buy shoes; those things won't change. But the greed will have to be sustainable on a dying planet; the profits will still be there. And the shoes will still be there, just designed by brilliant shoe artists w/ Mother Earth in mind: organic shoes which look like Louboutins, and Nikes.... 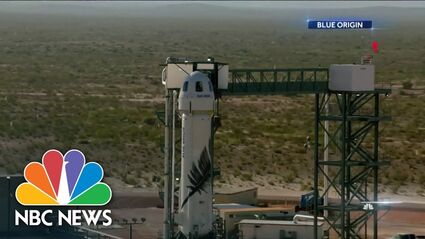 Coundown to liftoff of Blue Origin

Where there is hope there is also active action; within one's mind. Like when you do that New Years resolution vow to compel yourself to work out. Yes! But fuhgedabout that-- go get fat on ice cream; we need to work on our minds, recover them whence they were lean and investigatively questioningly mean. New Years '22 may be just another blur as was New Years '21. And, not to write yet another glib dispatch polemic; I know who my audience is-- most of you who are reading this are conscious, educated, rigorously informed, thoughtful, woke...and any descriptive you might interject. This article is a two-way street between my mind and yours & our computers (mine's a Macbook pro laptop, yours?); it's the Delta reductive. We're in our minimalized safety zones again. Vaxxed, wary of the invaxxed.

What's happened since March 2020 means the same thing we've always had to do: conduct our lives in some moral, ethical fashion which makes us feel good about ourselves and our fellow man. It's just more challenging now and likely for many more months to come, as Global Warming dovetails; the dove still flapping her blackened wings above our desperate planet. Oh, sorry, I meant to shift from dark to light and then hope; hope I have. Hope takes thought, work and action.