Photos are deceptive and appear to show whips, which are really the reigns of the horses. 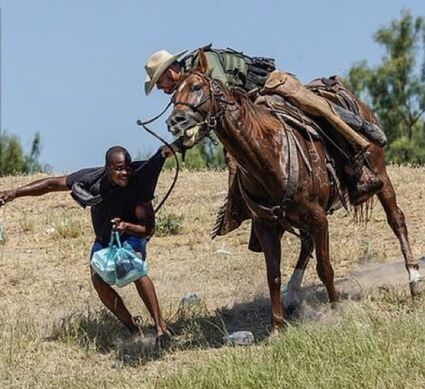 Sawyer Hackett, Executive Director of @JulianCastro’s People First Future., has claimed on Twitter that the photos below show US Border Patrol agents "rounding up Haitian immigrants with whips." 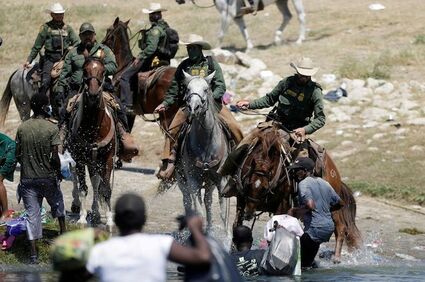 "Border patrol is mounted on horseback rounding up Haitian refugees with whips. This is unfathomable cruelty towards people fleeing disaster and political ruin. The administration must stop this. . . . Get the hell out of my mentions with the “these aren’t whips!” comments. I don’t care if they’re reigns, they’re hitting people with them. Media has reported them as whips too. Move on."

In fact, they are simply the reins of the horses, and not whips. The photo itself is deceptive.

When asked about this allegation that Haitian immigrants were being rounded up with whips, White House Spokesperson Jen Psaki said she had no further information, but obviously this would be wrong.

One Border Patrol agent denied the viral tweet, telling Fox News, "We do not carry whips and the only thing I see in their hands is reins."

The agent added, "BP does an excellent job when it comes to use of force training. There is no way a horse patrol unit would be whipping aliens. Whips are not issued or authorized for use." https://www.foxnews.com/media/border-patrol-agents-whips-haitian-migrants