The death of Carlos Tejada at 49, will undoubtedly be grist for Covid Vaccine Conspiracists. 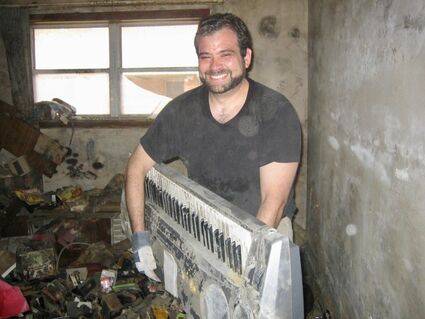 "Carlos was a prince. Here he is in New Orleans, when we stopped to muck out a musician's house after Hurricane Katrina."

Carlos Tejada, Deputy Asia Editor for The New York Times, has died at 49 of a coronary or a myocardial infarction. This according to a post from his wife on December 17th.

Tejada worked as a reporter in Asia for 13 years. The Times hired him in 2015, and previously he worked for The Wall Street Journal. He is survived by his wife and two children.

According to a post by former New York Times reporter Alex Berenson, Mr. Tejada died of a heart attack one day following his injection with a Moderna Covid "booster." Tejada received a Johnson and Johnson DNA/AAV Covid vaccine in July. He expressed gratitude for both shots on social media. A screenshot of his post is included with this article.

Anyway, one incident doesn't prove much. But the newspapers he worked for did push the vaccines that may have caused his heart to fail. The incident is bound to be noticed by those who believe the conspiracy theories about Covid vaccines.

On December 16th in Seoul, South Korea, Carlos Tejada received a Moderna mRNA/LNP "booster." Berenson described the Moderna booster shot: "No clinical trials have ever been conducted to examine the safety or efficacy of mixing various types of these vaccines, and Carlos did not give informed consent, as the consent form was in Korean, a language he could not read. He joked that Omicron should "hit me with your wet snot."

Mrs. Tejada posted the following on December 17th, 2021: This is Carlos's wife, Nora. It's with deepest sorrow that I have to share with you that Carlos passed away last night of a heart attack. I've lost my best friend and our kids lost a truly great dad. I will be off social media for awhile. 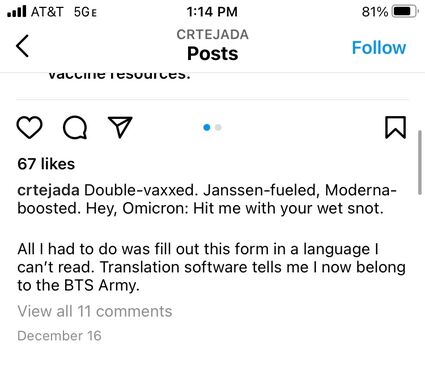 "If ever there was a single story that should send a cold chill down the spine of every "journalist" allowing this charade to continue it should be this one," replied Trump Motel. "24 hours removed from his boost and @nytimes is gonna pretend this was totally natural. RIP. Condolences to his family."

"Heart attack & stroke are also the collateral damage of the pandemic," tweeted G. Canalas. "That's why each should try to move constantly even lying down, you can move feet & arms. Exercise of your body is key to keeping it from being low batt. Move no matter what!"

"Carlos was one of my first regular editors at the Journal," tweeted Mike D Spector, referring to the Wall Street Journal, where Tejada once worked. "He made me feel so welcome and like I belonged. So kind and talented. He made work fun and put me at ease. It meant the world. Keeping all of my thoughts with you and your kids. Deepest condolences."

What are the “conspiracy theories” about the vaccine? That they don’t prevent transmission? That their immunity wanes over time? That they may cause adverse side effects, like blood clots or myocarditis? Is conspiracy theory the new term for grounded in fact?

My kids are starting to ask more questions about Santa...Does Cabela's have the real one, How did he know I wanted the unicorn squishmallow when I only told you about it, If you told him personally then can you put him on the phone now, Why were you rummaging around downstairs at 10:30 on Christmas Eve? It really ticks me off when they use data and empirical evidence to disprove my lies...my kids are a bunch of conspiracy theorists. I'm now worried they'll grow up to be skeptical of safe and effective treatments like an undertested mRNA vaccine that has only made a few hundred billion for pharmaceutical companies and has only killed 100x more than any other vaccine in history. Please help me get them back on track! Maybe I'll take a page out of Fauci's best seller, The Art of the Lie.

Play stupid games, win stupid prized! We warned you not to trust these Vaxx's