What is the Russian government telling its own people about war crimes in Ukraine? They deny their troops have misbehaved in any way 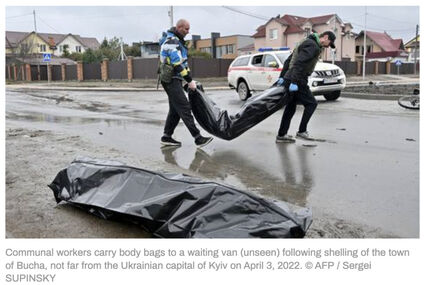 4.3.22: Russian state owned website RT.COM alleges that the shootings of civilians in Bucha were staged. Bodies were brought to Bucha several days later, alleges the news source, quoting Russian defense ministry sources. Ukrainian government actors tied hands of the bodies behind their backs, then shot them in the head, so as to fake their deaths and execution by the Russian army, says the English language website.

We repeat these allegations not because we think they have any validity, but to demonstrate what the Russians are telling their own people about war crimes in Ukraine. The Russians also say their bombing of a maternity hospital in Mariupol was staged. Here is a long quote from RT.com:

The Russian military has firmly denied accusations of mass killings of civilians in Bucha, a Ukrainian town northwest of Kiev. The claims have been raised by Ukraine itself, some Western media outlets and human rights groups, after Moscow had withdrawn its troops from the outskirts of Ukraine's capital.

"All photographs and video materials published by the Kiev regime, allegedly showing some kind of "crimes" by Russian military personnel in the town of Bucha, Kiev region, are yet another provocation," the Russian Ministry of Defense said Sunday.

Russian troops had been pulled out from the area on March 30, the military said, pointing out that "the so-called 'evidence of crimes' in Bucha appeared only on the fourth day" after the withdrawal, when Ukrainian intelligence and "representatives of Ukrainian television arrived in the town."

"Moreover, on March 31 the mayor of Bucha, Anatoly Fedoruk, confirmed in his video address that there was no Russian military in the town, but did not even mention any local residents laying shot in the streets with their hands tied," the Russian military also pointed out. 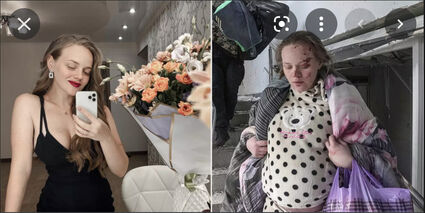 Mariana Vishegirskaya later went to Russia and recanted her story about Mariupol bombing.

RT.COM says government workers in Bucha staged the killing of civilians to rally public opinion in the West. Mariana Vishegirskaya, the pregnant woman seen around the world after the Mariupol maternity hospital bombing photos on March 9th; later posted a video where she said there had been no air raid; the hospital was shelled. https://youtu.be/T7X4kH9w__k

The Ukraine Prosecutor General's office says that 410 civilian bodies were removed over 48 hours from Kyiv Oblast. Iryna Venediktova said persecutors, investigators and forensic experts are examining the bodies of killed civilians found in the territories retaken after Russian forces had withdrawn to document Russia’s war crimes.