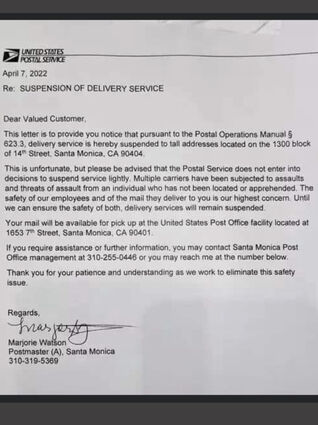 4.12.22: The Santa Monica Police Department have identified a suspect responsible for the halting of mail carrier service in the 1300 block of 14th Street. Davon Ray Morgan, age undisclosed, is the suspect of an Assault with a Deadly Weapon (broomstick) on a United States Postal Service mail carrier on January 19, 2022.

SMPD says Morgan is "known to our officers" and was also familiar to the mail carrier he attacked. He was described as someone who "lived in the area." The victim received a minor injury to his arm that did not require medical attention. The victim declined to prosecute, according to SMPD.

Morgan has a "lengthy arrest record with the SMPD" starting in 1998 when he was a juvenile. He is currently under investigation for two incidents in March, a battery and criminal threats. Those case will be presented to either the Santa Monica City Attorney if judged a misdemeanor or to the District Attorney if judged a felony. He was most recently arrested on April 6 for misdemeanor vandalism and possession of drug paraphernalia, for which he has a court date in May.

On April 7, residents of the 1300 block of 14th Street received a notice that the Post Office would no longer be delivering their mail because "Multiple mail carriers have been subjected to assaults and threats of assault from an individual who has been been located or apprehended." The news quickly spread, making it onto the local Fox News affiliate TV news by Sunday. 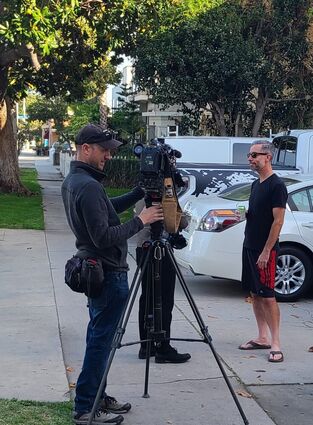 SMPD says they were not aware of the mail suspension letter until late Saturday, when a Tweet was "brought to our attention." SMPD says they contacted the United States Postal Inspection Service on the day of the original January incident and provided information. USPIS never contacted them. Their press release claims SMPD was "not contacted by any other postal workers between the incident in January and April 6th, when mail was suspended."

Since the publicity arising from the USPO suspension of mail service, SMPD has contacted the postmaster who wrote the suspension letter and an Inspector at USPIS "who may be able to provide additional information about other attacks on mail carriers in the area and possibly by the same subject."

In California, a simple assault (one that doesn't end with the victim in the hospital), can be charged as a misdemeanor, not a felony. DA George Gascon generally does not file charges in misdemeanor cases.

However, assaulting or interfering with a US Postal Service worker is a federal offense. Criminal charges stemming from such an assault would not be subject to local lax criminal laws.

''Age undisclosed''. The black suspect is 38 years old, which you could have figured out by looking up his criminal record. DOB: 01/30/1984. He has used the OPCC on 503 Olympic as a mailing address.

Would it be too much to ask, for the media to publish the assailant's photograph, so that the public may beware of him??

Victim declining to press charges does not prevent arrest or prosecution, which were, as always, at the discretion of police and prosecutor, not victim.