Making the Environmental Case for Paper

Myth: Electronic communication is better for the environment than paper 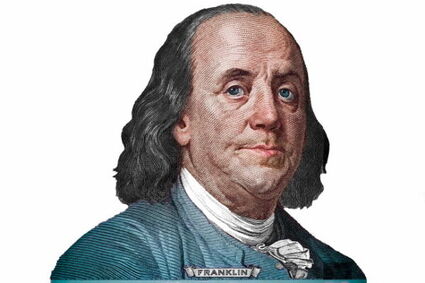 Ben Franklin: "An investment in knowledge pays the best interest."

Mail center professionals, who already operate in a challenging business environment, are increasingly faced with the task of responding to the popular, but scientifically flawed narrative that the paper critical to their operations is somehow environmentally unsustainable. If this describes you, then Ben Franklin, father of the Postal Service and first U.S. postmaster general, offers some sage advice: "An investment in knowledge pays the best interest."

In our increasingly digital world, knowledge – knowing the facts about the unique sustainability of paper – is a potent antidote to the common environmental myths used to justify replacing paper mail with electronic communications: that paper production and use destroys forests, is a major contributor to climate change, consumes enormous amounts of water and generates excessive amounts of waste.

Whether you are the leader of an in-plant mailing operation or the CEO of a company delivering mailing solutions to customers around the globe, these "go paperless" conversations will eventually land on your doorstep, if they haven't already. To demonstrate to your management, investors, customers and other stakeholders that print on paper is a truly sustainable choice, both today and in the future, you need to be armed with the facts.

Fortunately, there is an arsenal of data to help you make the case for the sustainability paper.

In the United States, trees to make paper are grown, harvested and regrown using sustainable forest management practices that perpetuate infinitely renewable forestlands. While the paper industry was producing products that enrich the lives of consumers, net forestland area in the United States actually increased 18 million acres between 1990 and 2020, according to the latest Global Forest Resources Assessment by the UN Food and Agriculture Organization (FAO). That's an area equivalent to 1,200 NFL football fields every day!

The U.S. Forest Service (USFS) reports that less than 2% of U.S. forestland is harvested each year, compared with 3% that is disturbed annually by natural causes like fire, insects and disease, and most of this 2% of harvested wood is used for non-paper purposes.

Contrary to the myth that paper destroys forests, the production of paper products is a powerful economic engine and driving force in keeping U.S. lands forested. By providing a dependable market for responsibly grown fiber, the paper industry encourages landowners to manage their forestland instead of selling it for development or other non-forest uses. More than half (58%) of the forestland in the U.S. is privately owned and managed, mostly by millions of small landowners, and they are under no obligation to keep their lands forested. Without the economic incentive provided by the paper industry, untold millions of acres of forestland would likely have been lost permanently to commercial land development – converted to building projects, strip malls or parking lots.

So, is deforestation in the U.S. a real concern? Yes, but using paper is not the cause. The FAO defines deforestation as the permanent loss of forestland. In fact, the definition specifically excludes logging for the production of paper and other products because trees in these "working forests" are expected to grow back, either through natural regeneration or sustainable forestry practices. In the United States, the primary cause of forest loss is rapidly expanding urban development, this according to the USFS.

Myth: Paper is a major cause of greenhouse gas emissions that contribute to climate change

According to the most recent data available from the U.S. Environmental Protection Agency (EPA), the pulp and paper industry is responsible for only 0.5% of total annual U.S. GHG emissions. These very low emissions are due to decades of energy efficiency and process improvements at U.S paper mills, and to the fact that the U.S. paper industry generates two-thirds of the energy to manufacture its products using renewable, carbon-neutral fuels, primarily biomass.

According to the EPA, the paper industry produces more carbon-neutral bioenergy than any other industrial sector, using mostly wood-based leftovers from the papermaking process. This bioenergy use prevents around 181 million metric tons of CO2 from entering the atmosphere each year – roughly equivalent to removing 35 million cars from the road.

While it's true that the paper industry uses large amounts of water to manufacture its products, most of that water is not consumed in the manufacturing process, this according to the National Council for Air and Stream Improvement (NCASI). NCASI reports that water used in the papermaking process is recycled up to 10 times in a typical paper mill, and then nearly 90% of that water is cleaned to meet federal and state clean water standards before it is returned to its source. Most of the remaining water evaporates back into the environment, with around 1% retained in the manufactured paper.

When it comes to circularity, the idea that products should be reused or recycled, paper has all other materials beat hands down. Thanks to the paper industry's voluntary, multi-billion dollar investments in commercial paper recovery infrastructure and to the commitment of millions of organizations and individual Americans who choose to recycle every day, U.S. paper recycling has nearly doubled over the past 20 years. At 68%, the EPA reports that the U.S. paper recovery rate is higher than any other material in the country, including plastics (9%), glass (25%) and metals (34%). The recovery rate of corrugated cardboard is 89%.

Myth: Electronic communication is better for the environment than paper

Any organization considering a paperless strategy for sustainability reasons must recognize that digital technology places enormous and growing burdens on the environment. Here too, the proof is in the data.

First, consider the environmentally intensive drilling and mining required to extract source materials from the earth. Computers, tablets and other electronic devices are made with non-renewable resources – fossil fuels, chemicals, precious metals, rare earth minerals and toxic minerals like lead, mercury and arsenic that are dangerous when released into the environment. Cisco, the worldwide leader in internet technology, projects that North America will have 5 billion networked devices in 2023, up from 3 billion in 2018 – a 40% increase. Cisco also projects that the average per capita number of devices and connections in the U.S. will reach 13.6 in 2023, far higher than the estimated 2023 global average of 3.6 devices per person.

Electronic devices and the massive server farms that support them are powered using mostly fossil fuels (only 17% of U.S. energy is generated from renewable sources). The Shift Project, a think tank focused on the shift to a post-carbon economy, reports that energy consumption for digital devices is increasing 9% each year, and the share of digital technologies in global greenhouse gas emissions increased by half between 2013 and 2019, from 2.5% to 3.7%. A 2015 study (Andrae and Elder) estimates that the information technology sector could use as much as 51% of global electricity and contribute 23% of global greenhouse gas emissions by 2030.

And according to the most recent Global E-Waste Monitor report, electronic devices create nearly 7 million metric tons of e-waste annually in the U.S., and only 15% of that e-waste is recycled. Most of the remaining e-waste is either burned, landfilled or dumped. 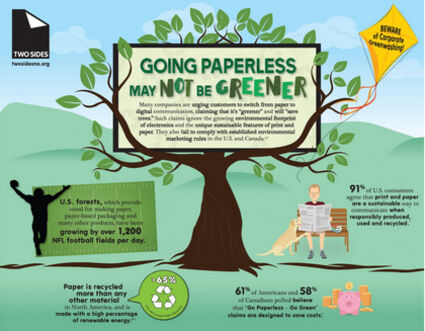 Digital technology has become an essential part of our everyday lives and is likely making beneficial contributions to your mailing operations, but it also has wide-ranging environmental impacts that continue to grow. While all manufacturing processes have an environmental footprint, the fact that paper is made with an infinitely renewable resource, is manufactured using mostly renewable, carbon-neutral energy, consumes very little water, is recyclable and is recycled more than any other material, makes a strong case for its continued use.

Two Sides North America (twosidesna.org) is a non-profit organization whose members span the entire print, paper, paper-based packaging and mail value chain. Funded entirely by membership dues, Two Sides is the only industry organization that directly challenges unsubstantiated environmental claims about paper made by corporations, the media, government agencies and others. Two Sides also supports its members with factual, science-based resources to supplement their own sustainability efforts. Learn how to join at twosidesna.org/become-a-member/.