As planned, Sam Bankman Fried appeared live on CNBC at the NY Times Roundtable discussion. Below are my notes. I'll clean up the typing later 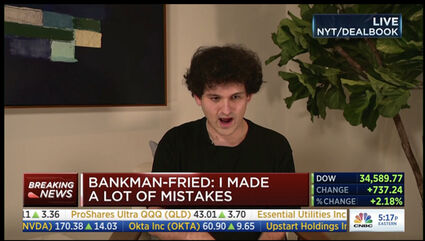 “Obviously that was a pretty big oversight. I was nervous because of the conflict of interest of being too involved. But that shouldn’t have meant that I didn’t have real oversight. I lived with one or two Alameda people, but I don't live with them anymore."

“I haven’t been thinking about Alameda’s oversight or its finances.” But you ran it, said the interviewer.

“Yes, I had a lot of exposure on that side, but I wasn’t running it.”

There were times when Alameda would be short assets because of a margin call. That position for Alameda became substantially larger by October than it had been in April.

But I also made a mistake that I feel embarrassed to admit. I underestimated how severe a crash could be, how quickly it would happen.

Most of the firms had borrows on FTX, the problem was this one was too big.

It took us a few years to get bank accounts. In the meantime, some customers were wiring money to Alameda to get credit on FTX.

By November 7th, When things took a turn I'm starting to feel uneasy that we would be able to fulfill customer withdrawals.

Expected value should be differentiated from security. I don't have any strong statements to make about what value they're assigned from a strong case or a medium case perspective. But obviously I was not cautions enough from a downside perspective.

What happened here was a 95% down move over a year, and a 60% down move with all of these coins in a correlated fashion. This was a specific crash of assets correlated with .

We've seen a lot of examples of this in history where when things get bad for assets, they all get bad in a correlated way, very quickly.

Yes, my lawyers are advising me not to speak and not to appear here today. But I don't see what good is accomplished by me sitting in a room pretending the outside world doesn't exist. I'm in the Bahamas where I've been the last year. I'm looking to be helpful with any of the global entities that need my help.

To my knowledge I could come to the US anytime. I've seen a lot of hearings that are happenings. I would not be suprised if I were asked to go up there (to congress) and speak.

I don't know what criminal liability I have. It sounds weird to say, but it's not what I'm focusing on. There will be a time and place for me to speak think about my time and my future. Look, I've had a bad month (laughter from the crowd). But that's not my focus here. I want to do everything I can to help people out who've lost, so it doesn't make sense for me to be focused on that.

On Nov. 7th things took a turn fast. I thought things were going to end up OK. Tehre were increasing withdrawal demand but we were procesing all of it. By Nov 8th, I did not think the odds were high that we would be able to meet all client withdrawals. I though there would be a significant liquidity shortfall.

I started to feel conflicted about what to say that I believed, and it no longer felt like that tweet (promising that client funds could all be covered) was no longer how I believed. 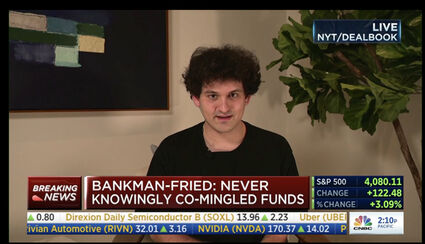 At that point, I was being cut off from systems. The US Team took steps to seize the assets. The Bahamian regulators took some of those assets at that time. There was also some improper access of assets on the exchange. I don't know who was behind that part.

The Shibboleth interview was with a long time friend of mine. I forgot she was a reporter. I thought I was just having an off the record conversation with a friend. What I care about the msot are things that have a lot of impact on the world. Blockchain could have a big impact. No one should die from disease. Those things I think matter, and they're among the most important things to me.

Separately there's a bunch of bullshit that public companies do to trade good. Everyone who does them knows they're kind of dumb, don't have a big impact on the world. I 3 different quarterbacks make touchdowns during a game, we'll donate a car to a worthy cause.