Like Barbie, the masked gunman who knocked over a Wells Fargo Bank needs cultural sensitivity training. 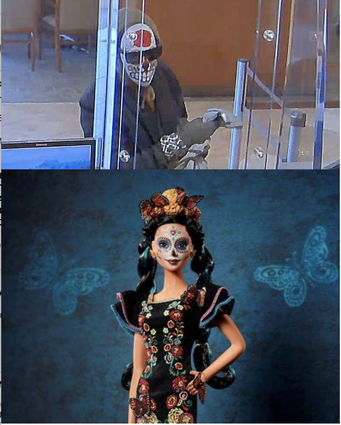 Top photo was released by the Santa Monica Police after a Sept. 10th bank robbery. Bottom photo shows "Day of the Dead Barbie." Like Mattel, the bank robber has been accused of cultural appropriation.

If the cops can't find him, the Twitter Mob will.

A man wearing a Day of the Dead Halloween mask, held up the Wells Fargo Bank on 9th Street and Montana Avenue at 9:45 am on Tuesday. Santa Monica Police say he is wanted on charges of bank robbery, assault and cultural appropriation.

"It is important to recognize the inherent dignity of indigenous cultures," said the Santa Monica Police Department in a press release. "Use of a Day of the Dead Mask during a robbery can be a separate offense or an enhancement, under the California Penal Code. In this case, the suspect is sought for violating the rights of indigenous peoples, and for bank robbery."

If sentenced, the unidentified, unwoke bank robber could be made to attend training classes in Cultural Sensitivity, Social Justice and "woke" culture, in addition to 20 years for bank robbery. Excluding the 20 years, he would be treated like any employee at Google, Apple or Twitter, in other words.

Many have called out the robber on twitter, charging him with 'cultural appropriation'. 'Is this a bad joke or what?' Tweeted one critic. 'Día de los Muertos is one of our most sacred traditions in Mexico dating back to prehispanic days. STOP wearing Day of the Dead Masks now!'

'Cultural Appropriation Bank Robber is truly criminal,' another added. 'No! Day of the dead is a religious celebration for the indigenous ppl of Mexico. It is being used by white bank robbers to make $. No one believes a 6'4" white dude celebrates Day of the dead. Cultural appropriation at its worst!' Tweeted another.

Wells Fargo Bank offered a reward for the suspect, doubling it when they found out the charges included Cultural Appropriation. "Wells Fargo Bank does not tolerate racism, cultural appropriation or discrimination of any kind," said the publicly traded company in a statement.

Brandishing a shotgun, the suspect demanded money from the tellers, who were behind bulletproof window.

After leaving the bank, the Halloween Mask bandit scaled an eight foot cinderblock wall, escaping past the Valet parking attendant.

The robber, who took $3000 to $5000, got into into a red SUV with a get away driver waiting for him in the alley. This according to one witness.

A different witness thought he saw the suspect entering the carport off the alley between 9th and 10th streets. So the Santa Monica Police closed a four block area for five hours while they searched for the suspect.

Police set up a command center in front of Roosevelt Elementary School. Officers from Beverly Hills PD, Inglewood PD, LAPD and the LA Sheriff's Department also assisted in the search, which involved at least 80 officers and an LAPD Helicopter.

Witnesses described the unidentified suspect as a 6'4" black male weighing 220 pounds and carrying a shotgun and wearing a skeleton mask and blue shoe covers.

No one was injured in the robbery. "At the time, yeah, we were frightened," one teller told The Observer. "Fortunately, it was over quickly, and he didn't injure anyone."

The Wells Fargo Bank now has an armed security guard. He was letting patrons into the bank one by one on Wednesday. 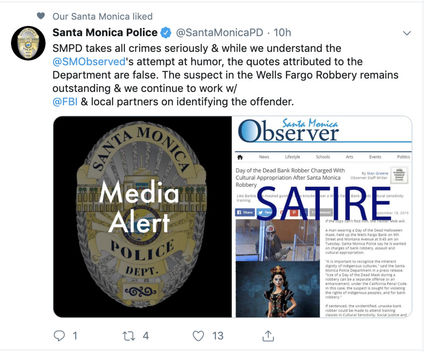 Mattel has just released a limited-edition 'Day of the Dead' Barbie in celebration of the Mexican holiday Día de Muertos – but some critics are not happy with the doll. The toy features 'sugar skull' face paint, a headdress and a black, floral, Mexican dress and is available to buy at Walmart, Target and Amazon.com for $75. https://metro.co.uk/2019/09/12/mattel-accused-cultural-appropriation-day-dead-barbie-10731657/?ito=cbshare

Update 9/18/2019: This article, which was picked up by Yahoo news, is intended as satire. No one from the SMPD actually said the unidentified bank robber could be charged with cultural appropriation. We thought it was kind of obvious.

Really? You publish LIES like this? Why? Did the journalist fact check with the police department? FACT: There is no crime called cultural appropriation. You just reinforced the image of the Lying MSM ... way to go!

Way to go with the fake news. I used to take what I read here seriously, especially as it pertained to local crime stories. You went all out with the fake quotes from police reps and everything. Now your virtue signalling buffoonery has gone national. SMH

Cultural appropriation is against the law in California? ROFL. No wonder so many people are moving away.