The same newspaper that called Larry Elder "The Black Face of White Supremacy" pretty much ignores a racist attack on a Republican. 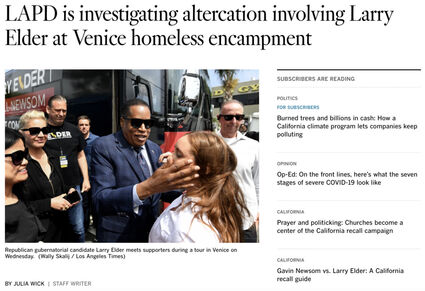 Headline from the LA Times

The Los Angeles Times newspaper, which has told voters repeatedly to "Just Say No" on the recall, downplayed the racist attack on recall candidate Larry Elder yesterday. Elder, who is black, was attacked by a white woman wearing a gorilla mask who hurled an egg at his face.

"LAPD is investigating altercation involving Larry Elder at Venice homeless encampment," was the headline. which implies that Elder went to Venice to pick a fight. https://www.latimes.com/california/story/2021-09-09/lapd-investigating-larry-elder-homeless-attack-venice

The LA Times does admit the attack had racist overtones. The woman wearing a gorilla mask, rode on a bicycle who later punched one of Elder's older male assistants. An excerpt from the article by LA Times staff writer Julia Wick:

The Los Angeles Police Department is investigating an altercation Wednesday in Venice involving a group of homeless people and supporters of Larry Elder, Republican candidate for governor. . . . . . .

A woman in a gorilla mask riding a bicycle threw the small white object past Elder’s head, as seen in a video posted on Twitter by Spectrum News reporter Kate Cagle. The woman appeared to be white, Elder is Black. Ape characterizations have been used as a racist trope for centuries.

Moments later, the woman took a swing at a man who appeared to be part of Elder’s team. The man was hit by at least one other heckler just before Elder was escorted into a white SUV.

. The LA Times also features an editorial telling readers once again, to vote against the recall. "Just say no. Here are all the reasons to reject the recall, from The Times Editorial Board". The Los Angeles Times has previously endorsed moderate Republican and former San Diego Mayor Kevin Falconer for question two.