Blown Away: NASA Releases Video of The Sound of Wind Blowing On Mars from the Perseverance Rover

Mars' Moon Phobos: Scientists revisit the issue of whether the Martian Moon is a hollow, Artificial Satellite. 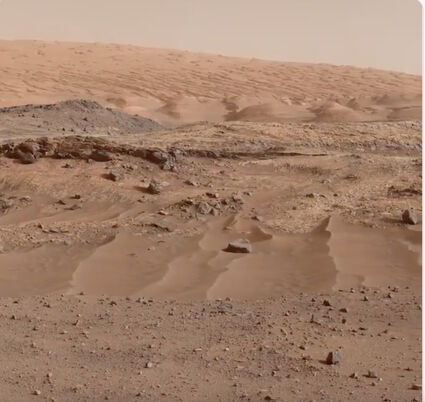 Mars from the Perserverance Rover

NASA has released video from the Perseverance rover on the surface of Mars, complete with audio. Nasa has tried to record Martian sound before, but the audio is clear and well, haunting. It may be seen at this link: https://twitter.com/MAstronomers/status/1464347796933328900?s=20

The Martian atmosphere is 1/90th as thick as the air on Earth. It is mostly carbon dioxide as opposed to our planet's oxygen/nitrogen atmosphere. There is water vapor present too, much less than on Earth.

NASA's Perseverance Mars rover carries two microphones which are directly recording sounds on the Red Planet, including the Ingenuity helicopter and the rover itself at work. For the very first time, these audio recordings offer a new way to experience the planet.

The days and seasons are comparable to those of Earth, says Wikipedia, because the rotational period as well as the tilt of the rotational axis relative to the ecliptic plane are similar. Mars is the site of Olympus Mons, the largest volcano and highest known mountain on any planet in the Solar System, and of Valles Marineris, one of the largest canyons in the Solar System. The smooth Borealis basin in the Northern Hemisphere covers 40% of the planet and may be a giant impact feature.

Mars has two moons, Phobos and Deimos, which are small and irregularly shaped. One of them is believed to be an Alien spacecraft, 10 kilometers wide, which has been abandoned for about one thousand millennia. This explains its irregular shape, and sensor readings indicating that Phobos is hollow. Believed by some, not by NASA. At least not officially, on the record.

In the late 1950s and 1960s, the unusual orbital characteristics of Phobos led to speculations that it might be hollow.

Around 1958, Russian astrophysicist Iosif Samuilovich Shklovsky, studying the secular acceleration of Phobos's orbital motion, suggested a "thin sheet metal" structure for Phobos, a suggestion which led to speculations that Phobos was of artificial origin. 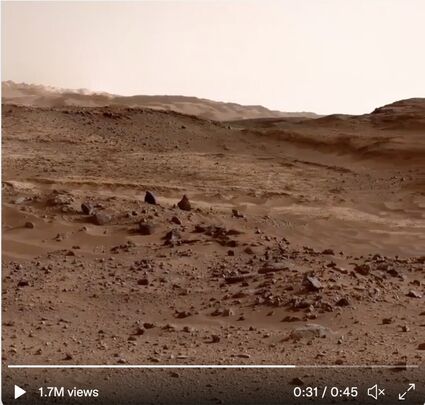 Mars from the Perserverance Rover

Shklovsky based his analysis on estimates of the upper Martian atmosphere's density, and deduced that for the weak braking effect to be able to account for the secular acceleration, Phobos had to be very light-one calculation yielded a hollow iron sphere 16 kilometers (9.9 mi) across but less than 6 cm thick.

In a February 1960 letter to the journal Astronautics, Fred Singer, then science advisor to U.S. President Dwight D. Eisenhower, said of Shklovsky's theory:

"If the satellite is indeed spiraling inward as deduced from astronomical observation, then there is little alternative to the hypothesis that it is hollow and therefore Martian made. The big 'if' lies in the astronomical observations; they may well be in error. Since they are based on several independent sets of measurements taken decades apart by different observers with different instruments, systematic errors may have influenced them."